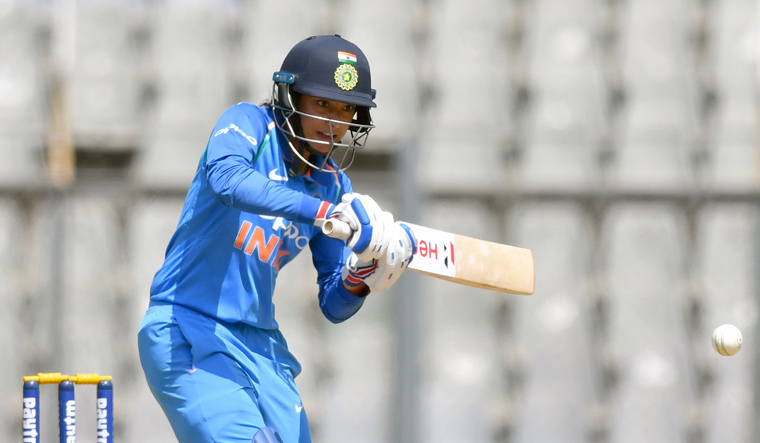 Medium-pacer Katherine Brunt grabbed a five-for as India frittered away the platform laid by vice-captain Smriti Mandhana and Punam Raut to finish at 205 for 8 against England in the third and final ODI in Mumbai on Thursday.

The 33-year-old Brunt (5-28) was the wrecker-in-chief as the hosts suffered a middle-order collapse after they slumped from 129 for 1 to 150 for 7 and never recovered from that.

However, Deepti Sharma (27 not out) and Shikha Pandey (26) ensured that India crossed the 200-run mark with 47-run eighth wicket stand.

Earlier, opting to bat, the hosts lost Jemimah Rodrigues (0) early, after she played onto her stumps off Brunt.

But then Mandhana (66 off 74 balls) and Raut (56 off 97 balls) steadied the ship with their 129-run second wicket stand. They initially played with caution and later hammered the loose deliveries as they toyed with the English attack.

Mandhana, who mostly relied on pulls and drives, stuck eight fours and a six, while Raut hit seven boundaries.

But Brunt pegged back England by removing both Mandhana and Raut in the 29th over. While Mandhana gave a sitter to Dannie Wyatt, Raut was cleaned up.

Brunt then trapped Mona Meshram (0) in front of the wicket and later sent Mithali Raj (7) back to complete the five-wicket haul.

Taniya Bhatia (0), Jhulan Goswami (1) also fell cheaply as the visitors made a splendid comeback in the middle-overs.