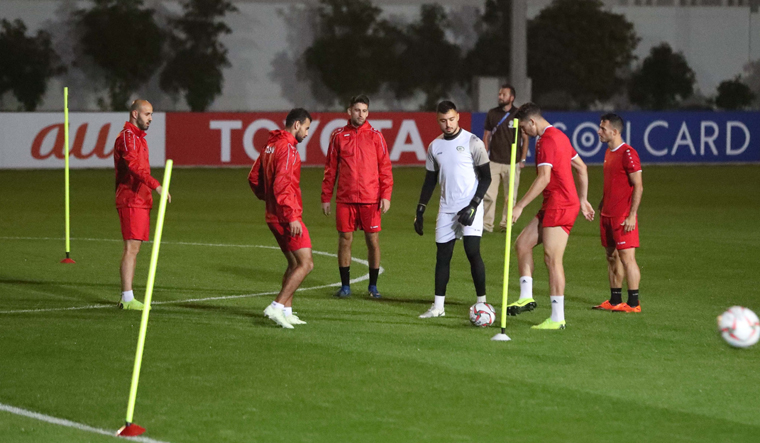 Players of Palestine's national football team take part in a training session in Sharjah, northeast of Dubai on January 4, 2019, on the eve of the 2019 AFC Asian Cup | AFP

Football may have been invented in Europe, but the soul of the sport, for long, resided in South America. In recent times, European football bought everything it could lay its eyes on and in the process it also bought back (or has at least tried to buy back) the sport’s soul. The Copa America is rated by football fans worldwide, but not half as much as the Euros. The African Cup of Nations comes a distant third in order of importance. Finally, in some tiny corner, there is the AFC Asian Cup.

Most of us have been guilty of according the same degrees of importance to these competitions, consuming mostly what is easily available and popular in public domain. Yet, while Europe’s biggest concern for the Asian Cup will be the “loss” of Tottenham and South Korean attacker Heung-Min Son for a few weeks, there are war-torn countries like Palestine, Syria and Yemen for which this competition means much more. India marks a return to the event after missing out on qualification for the 2015 event.

The 64-year-old, 24-team big AFC Asian Cup kicks off in UAE on Saturday with the hosts playing Middle East neighbours Bahrain. Six groups of four teams each make up the group stage, before the top two of each and four best third-placed teams advance to the round of 16. Australia, Japan, Iran and South Korea look like the main title contenders, but one cannot discount the likes of Iraq, UAE, Saudi Arabia or even China from making their mark at this event.

The competition is bang in the middle of a European season, so don’t expect to see many stars around. (Not like there were that many in the first place.) Out of the existing Asian stars, Son will be gracious enough to participate in the competition in South Korea’s final group match and in the knockout rounds. Japan’s Shinji Kagawa and Shinji Okazaki aren’t even in the fray. Australian midfielder Aaron Mooy, who plays for Huddersfield Town in the Premier League, is out injured.

Despite Asian teams being ranked so low in the FIFA rankings, a couple of teams showed their mettle to create ripples at the 2018 World Cup—at least by Asian standards. Iran held Portugal to a 1-1 draw before bowing out in the group stage; South Korea stunned world champions Germany 2-0 to end their campaign and the Japanese led Belgium 2-0 in the round of 16 before frustratingly conceding three second half goals.

Iran looks to be firm favourite this time. Since the 2015 Asian Cup that was won by host Australia, Iran has lost only one competitive game—the narrow 0-1 loss to Spain in Russia. Under former Real Madrid coach Carlos Queiroz, the Iranians boast of Asia’s best defence, having made it 12 games in a row without conceding during the qualification rounds for the World Cup.

Defending champion Australia, on the other hand, had a forgettable World Cup, but come into the tournament as a team in transition. The legendary Tim Cahill has retired and with multiple injuries, the youngsters from the Australian A-League are looking to replicate the 2015 success. The island nation was drafted into the Asian confederation in 2006 and the 2015 title came as relief after years of underachievement.

From the far east, South Korea and Japan are expected to light up the Emirates with their attacking football. Both teams feature in easy groups and have had largely successful games leading up to the event. Japan is the competition’s most successful team with four titles; the Koreans have two.

India runs the risk of being an also-ran. Most credit the Blue Tigers’ qualification this time to the tournament being expanded from 16 to 24 teams this time. This is India’s third appearance at the Asian Cup, the last one coming in 2011 where it finished bottom of its group. India’s first appearance was in 1964, when it finished second to champion and host Israel. Just one minor detail though—only four teams contested. Eleven teams withdrew from the event.

Realistically, India does not stand a chance against hosts UAE, has a slim chance against Thailand, and will do well to upset Bahrain, in its three group stage games. And as much as the AIFF presidents, past and present, may be peddling the idea of qualifying for a World Cup soon, making it past this group will need nothing short of a miracle. More on the Indian team later.

The expanding of the quadrennial tournament means that Yemen, the Philippines and Kyrgyzstan make their first appearance at the continental event. China, with all the money it has splashed to lure many international superstars, seems to have made little progress with its national team. Coached by World Cup winner Marcello Lippi, the world’s most populous country may make it past the group stage, but is unlikely to go far. Talks of the Chinese implementing the German system of grassroots development is yet to come to fruition.

The Zayed Sports City Stadium in Abu Dhabi, which will host the opening ceremony, witnessed Real Madrid winning the FIFA Club World Cup and tennis world number one Novak Djokovic besting Kevin Anderson in the Mubadala Championship final. This is the second time that UAE will host the Asian Cup. The last time the Emiratis did, in 1996, the host reached the final, finishing runner-up.

Political analysts will be following this tournament with much intent. The biggest clash of the group stage looks to be Saudi Arabia vs Qatar not for footballing reasons, but for the strained diplomatic relations between the two countries that has the forced most super powers to take sides. But then, multinational competitions are almost never exempt from such situations, and just like the democratic west grudgingly participated in Russia last year, the Asian Cup clashes will be no different. Aptly, the theme of this year’s event is “Bringing Asia together”.