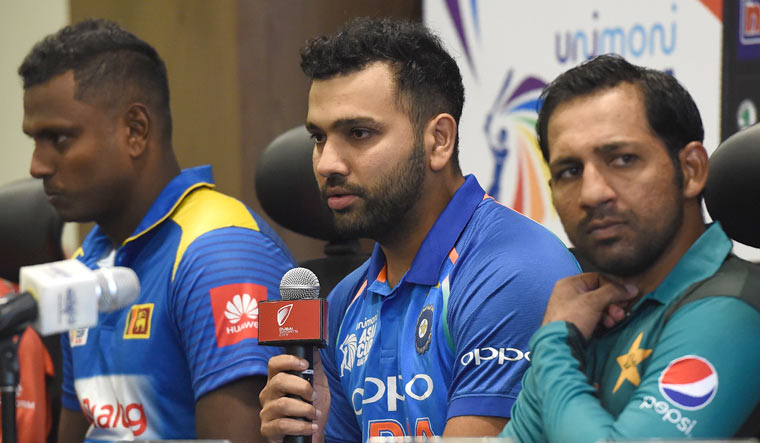 The World Cup is still eight months away but India skipper Rohit Sharma feels that the six-nation Asia Cup starting on Saturday will give his side a chance to work towards a "perfect combination" going into next year's mega event.

India are still searching for a perfect middle order combination in the ODIs even as they have a settled top three in stand-in skipper himself, Shikhar Dhawan and regular captain Virat Kohli.

Asked if the Asia Cup will be a build up to next year's World Cup in England, Rohit said: "In a way, you can say that. Every team wants to go to the World Cup in a good frame of mind. But we shouldn't be looking too far ahead. Obviously the Asia Cup gives every team an opportunity to get the combination right before the World Cup."

However, during the captains' press meet, the talented Mumbaikar said that while the World Cup will be at the back of his mind, it is better to take one game at a time.

"I won't understand how Angie (Angelo Mathews), Sarfraz (Ahmed) or Mashrafe (Mortaza) are looking at it and what their strengths and weaknesses are. But as the tournament progresses, we will understand what teams are doing.

"The World Cup is too far ahead. We will play a lot of games before that. A lot of players will get an opportunity to stake claim for a berth in that World Cup squad. It's a great opportunity to try for that perfect combination," said Rohit.

India begin their Asia Cup campaign against Hong Kong on September 18 before taking on arch-rivals Pakistan the next day.

While India versus Pakistan games are of primary interest, Rohit said it's not just about one match.

"Pakistan have played some great cricket of late and we are looking forward to that clash. However, by no means I am saying that focus should be on one game as all the games that are going to be played over here will be quite competitive," he said.

"The focus should be on the whole tournament because every nation is eyeing that title. Also for the first time, I am captaining in a full tournament and it's exciting for me personally."

While he played for Mumbai Indians during the first phase of IPL-1, Rohit last played in Dubai in a representative tournament for India A, way back in 2006.

"I am very happy to be back here. I didn't actually realise that we haven't played here for the past 12 years."

Asked about the weather, Rohit admitted that it's not really pleasant and also felt that the group that was in England for the Test series needed the break to rejuvenate themselves.

"It's not pleasant for sure. For the guys who were in England, it was a hectic tour and it is only fair that they go home and spend some time with their families and then come here. It is not easy but then weather is going to be same for all the teams. So, we have to just focus on playing good cricket. That's all," he said.