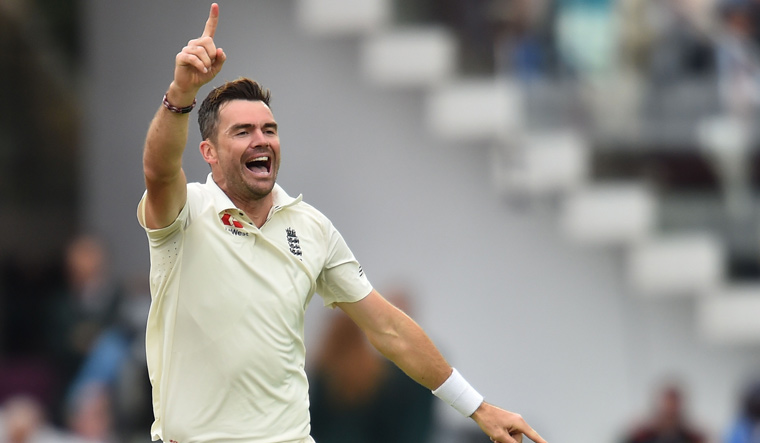 James Anderson celebrates after dismissing K.L. Rahul on the second day of the second Test match between England and India at Lord's in London | AFP

Jimmy Anderson once again exposed the frailties of a wobbly Indian top order as they were reduced to 15/3 before rain interrupted play yet again on day two of the second Test match, at Lord's in London.

The seamer removed openers Murali Vijay (0) and K.L. Rahul (8) in a space of 15 balls as play was stopped after 6.3 overs as the heavens opened up. India went to early lunch in a spot of bother at 11/2.

When play resumed, it lasted only 12 more balls. But India managed to lose one more wicket—Cheteshwar Pujara (1) was run out after a horrible mix-up with captain Virat Kohli (3*)—with the addition of four more runs to the total. Pujara has now been involved seven out of the 10 Indian run-outs in the past few Test matches.

Earlier, after rain washed out the opening day without a ball being bowled, England skipper Joe Root won the toss and elected to field against India.

The visitors once again made a horrendous start under heavy cloud cover even as the match started on time on the second morning.

Vijay looked to do well, but played an uncharacteristic flick shot to a late outswinger from Anderson and was bowled for a five-ball duck.

Rahul started well against Stuart Broad and managed to get two boundaries as well. Against Anderson, it was a sterner challenge, as he nicked one in the seventh over and was caught behind.

The hosts made two changes from the first Test, bringing in Chris Woakes for Ben Stokes and handing 20-year-old Ollie Pope his maiden cap replacing an out-of-form Dawid Malan.

India made two changes, and surprisingly, brought in an extra spinner. Kuldeep Yadav was picked ahead of Umesh Yadav, while Pujara made a comeback to the playing XI with Shikhar Dhawan left out after a poor outing at Edgbaston.