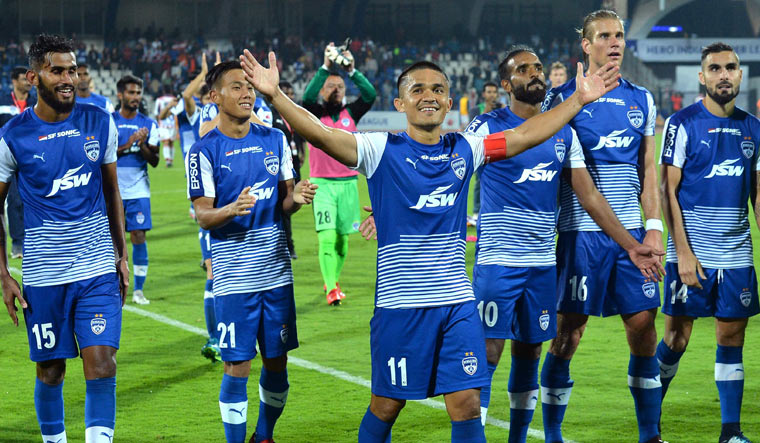 Chennaiyin FC stand in the way as Bengaluru FC, the model club of Indian football, seek a triumphant conclusion to what has been a remarkable maiden campaign in the Indian Super League, here on Saturday.

Having clinched the prestigious Federation Cup and I-League twice, Bengaluru FC will attempt to crown themselves with the ISL trophy before their home fans at the Sree Kanteerava Stadium.

After moving into ISL from I-League, Bengaluru have scripted a fairytale narrative, winning 13 of their 18 matches and qualifying for the playoffs with four games to spare. They were eight points clear of second-placed Chennaiyin.

Miku and skipper Sunil Chhetri have got Bengaluru major chunk of the goals, bulging the net on 24 occasions, a feat which has the potential of sending shivers down the rival's spine.

Miku stands second on highest goal-scorers' list by scoring 14 times and Chhetri stands fifth with 10 to his credit, which includes his fantastic hat-trick in the second leg semifinal against FC Pune City last week.

Nishu Kumar, Udanta Singh and Erik Paartalu have been extremely good before their home fans.

Though Bengaluru may miss defender Harmanjot Khabra due to a rib injury that he has been nursing since February, chief coach Albert Roca still have a formidable defence lineup to bank on. The list includes Spaniard Dimas Delgado, John Johnson, Juanan, Lenny Rodrigues, Rahul Bheke and Subashish Bose.

Apart from possessing some top class strikers and effective midfielders, Bengaluru boast of having India's No 1 goalkeeper Gurpreet Singh Sandhu in their ranks.

Sandhu had been instrumental in bringing up some spectacular saves at crucial stages.

The club has won two league titles, including the I-League in their debut season, and two Federation Cups. In November 2017, the club began playing in the Indian Super League after becoming an expansion team in the league.

Despite only playing four seasons in the I-League, the club were considered one of the model clubs of Indian football.

Bengaluru drew praise for bringing a new sense of professionalism to Indian football, including the use of on field equipment meant to help player fitness.

Roca would be expecting his players to execute 'set-piece' instructions to perfection and make his trusted deputy and compatriot Carles Cuadrat a happy man at the end of the match.

How Bengaluru banks on set-pieces is reflected in their opening two matches of the campaign against Mumbai City and Delhi Dynamos. Three of the Blues' goals in those two wins came from set-pieces.

On the other hand, Chennaiyin have done well this season to storm into the title clash.

The visitors never looked like they would not qualify for the semifinal slot, but they had some anxious moments here and there. They ploughed their way back under the guidance of English coach John Gregory who has instilled a sense of belief into the squad.

Jeje Lalpekhlua has struck form at the right time when he scripted a brace against Goa FC in the second leg of the semifinal, helping Chennaiyin to blaze through to the summit clash.

Jeje has scored nine goals this ISL after a harrowing time in some of the matches.

Giving company to Jeje will be Raphael Augusto, who is a nightmare for defenders.

Karanjit Singh has been in supreme form and so have been the midfielders, Bikramjit Singh and Dhanpal Ganesh, who have 30 games between them this season.

Second-choice midfielders Anirudh Thapa and Germanpreet too have fulfilled the expectations of Gregory whenever they were given a chance.

Thapa is one of the best young midfielders in India.