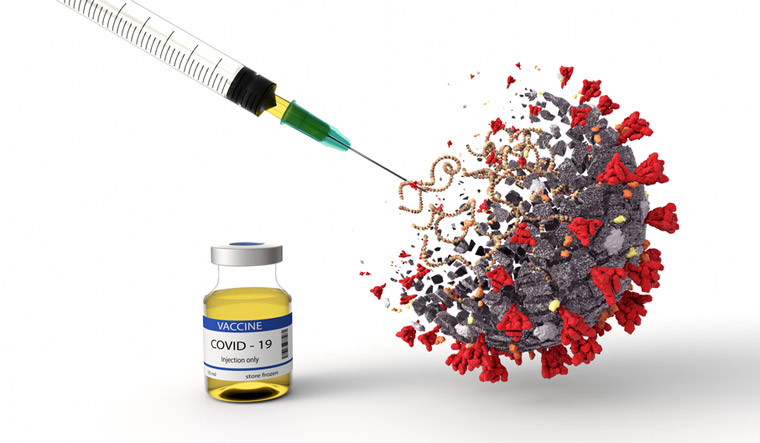 SARS-CoV-2 has the ability to evolve and change its genetic code, leading to new variants against which vaccines are less effective

Scientists have developed artificial enzymes programmed to target the genetic code of SARS-CoV-2 and destroy the virus, an advance that may lead to a new generation of antiviral drugs for COVID-19 and its variants.

Enzymes are naturally occurring biological catalysts, which enable the chemical transformations required for our bodies to function -- from translating the genetic code into proteins to digesting food.

Although most enzymes are proteins, some of these crucial reactions are catalysed by RNA, a chemical cousin of DNA, our genetic material, which can fold into enzymes known as ribozymes.

Some classes of ribozyme are able to target specific sequences in other RNA molecules and cut them precisely.

In 2014, Alex Taylor and colleagues from the University of Cambridge, UK, discovered that artificial genetic material known as XNA -- in other words, synthetic chemical alternatives to RNA and DNA not found in nature -- could be used to create the world's first fully-artificial enzymes, named XNAzymes.

These artificial enzymes can cut long, complex RNA molecules and are so precise that if the target sequence differs by just a single nucleotide -- the basic structural unit of RNA -- they will recognise not to cut it.

This means they can be programmed to attack mutated RNAs involved in cancer or other diseases, leaving normal RNA molecules well alone, the researchers said.

The study, published in the journal Nature Communications, demonstrated the use of this technology to successfully 'kill' live SARS-CoV-2 virus.

Creating new XNAzymes can be done in far less time than it normally takes to develop antiviral drugs, according to the researchers.

Taylor teamed up with Nicholas Matheson to show that these XNAzymes were active against live SARS-CoV-2 virus.

"It's really encouraging that for the first time and this has been a big goal of the field we actually have them working as enzymes inside cells, and inhibiting replication of live virus," said Pehuen Pereyra Gerber, who performed the experiments on SARS-CoV-2 in Matheson's lab.

"What we've shown is proof of principle, and it's still early days," added Matheson.

Taylor checked the target viral sequences against databases of human RNAs to ensure they were not present in our own RNA. Because the XNAzymes are highly specific, this should in theory prevent some of the 'off-target' side-effects that similar, less accurate molecular therapeutics may cause, such as liver toxicity, the researchers said.

SARS-CoV-2 has the ability to evolve and change its genetic code, leading to new variants against which vaccines are less effective.

To counter this problem, Taylor not only targeted regions of the viral RNA that mutate less frequently, but also designed three of the XNAzymes to self-assemble into a 'nanostructure' that cuts different parts of the virus genome.

"We're targeting multiple sequences, so for the virus to evade the therapy it would have to mutate at several sites at once," he said.

"In principle, you could combine lots of these XNAzymes together into a cocktail. But even if a new variant does appear that is capable of getting round this, because we already have the catalytic core, we can rapidly make new enzymes to keep ahead of it," Taylor added.

XNAzymes could potentially be administered as drugs to protect people exposed to COVID-19, to prevent the virus taking hold, or to treat patients with infection, helping rid the body of the virus, the researchers said.

This sort of approach might be particularly important for patients who, because of a weakened immune system, struggle to clear the virus on their own, they said.

The researchers next plan to create XNAzymes that are even more specific and robust allowing them to remain in the body for longer, and work as even more effective catalysts, in smaller doses.