How drones can help revolutionise agriculture in India

They are used for administering pesticides, dealing with pests, monitoring fields 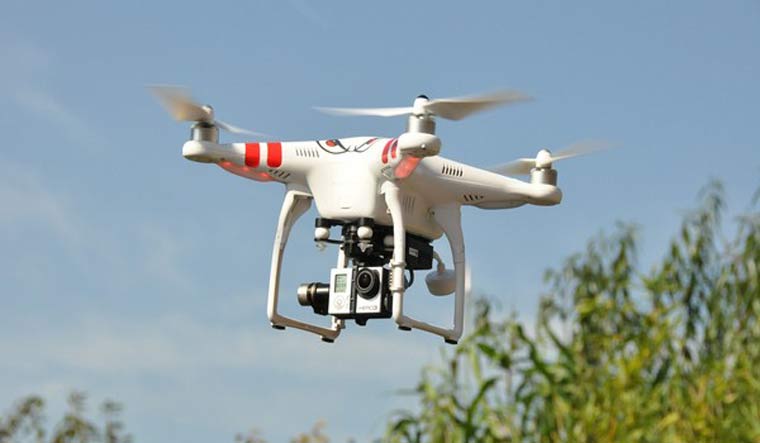 Drones have been widely used in agriculture, including for spraying fertilisers in large farms and mapping agriculture plots. Countries like Israel even use them to pluck apples from farms. Two different drones fly from two sides, one with a cart and the other to identify apples and pluck them from the tree and put them in the basket. Such tasks can be tedious, time-consuming and expensive if done manually. Fruit plucking drones need artificial intelligence (AI) to identify the condition of the fruit and pick only the ripe ones.

Data-driven solutions based on machine learning (ML), and using AI are available for analysing tree health.

In India, drones are being used to access crop damage, spray pesticides and fertilisers and tackle locust onslaughts. Depending on the purpose, a drone can be mounted with either a spraying mechanism along with a container or sensors for mapping crops. Based on the size and configuration of the drone, an agricultural drone can cost anything between Rs 1 lakh to Rs 10 lakh. The Indian government is now providing subsidies to various agricultural organisations and up to 90 per cent loans on the subsidised amount for farmers looking to procure them.

Experts feel that in India drones can be a bridge for the less affluent farmers to replicate large farmers, especially in the developed countries, who use aircraft for a variety of tasks. “For the average Indian farmer, a drone will convert the dream of being able to use an aircraft for farming into an affordable service,” said Girish Linganna, aerospace and defence expert and managing director, ADD Engineering India. Experts believe that AI is a strong suit for the Indian drone ecosystem and we must leverage our expertise in designing sophisticated systems that use drones to either minimise dependence on labour or fast-track the process.

“One AI application is seed pod planting, where AI can guide a drone to automatically shoot pods containing seeds and plant nutrients into a prepared soil patch. With more sophisticated AI, drones can detect using thermal, multi-spectral or hyper-spectral sensors where there are moisture deficits and only irrigate those areas with precision. If one adds a LiDAR (Light Detection and Ranging), sensor to the drone, with AI, a farmer will be able to estimate timber or sugarcane production. Some researchers are even working on AI-enabled software to perform faster soil analysis. This technology will create accurate 3D maps that can be used for planting planning, irrigation, estimating nitrogen levels and hence, even help the farmers plan adequate fertiliser inputs for optimal growth of crops,” said Linganna.

With the research being undertaken, an Indian farmer of the future can be envisioned using tablets while swarms of drones will buzz about. The future Indian farmer will be able to have plenty of insights that will aid them in deciding which crop to grow, its quantity, the number of fertilisers and pesticides, and much more. AI can change the face of agriculture in India.

Though experts believe that one of the most popular use cases for drones in agriculture has been spraying various chemicals like fertilisers and pesticides, as per Ramesh Kestur, a specialist in AI and agricultural drones, this use case is replete with issues. “The key problem is the downwash of chemicals. Drone-aided dispensation of chemicals is heavily influenced by flight height. Downwash is the action of changing the direction of air diverted by the drone aerodynamics during the process of lifting,” said Kestur.

The current state of India’s farmers and commercial drone solutions pose particular challenges to fully utilising drones in agriculture. According to a published report by the Indian Council of Agricultural Research’s (ICAR) National Institute of Abiotic Stress Management, India faces challenges due to weather dependency on drones, lack of proper internet connectivity across our arable farms, lack of knowledge and skill of the end users, and the potential for misuse. The report published in 2020 also spoke on the issues posed by the national laws regarding using drones for specific uses.

“The mechanism of the downwash wind field is under active study. This means that the use case for the targeted application of chemicals like fertilisers, insecticides and pesticides should differ from the preferred use case. India, an importer of cumin, faced rejection while exporting due to increased pesticide residue levels. Hence, any innovation in such application must be thoroughly studied as the impacts are far-reaching. The proper use case for drones in agriculture needs to be included, rendering the current trends part of the hype,” said Kestur.