Drumming in woodpeckers is neurologically similar to singing in songbirds 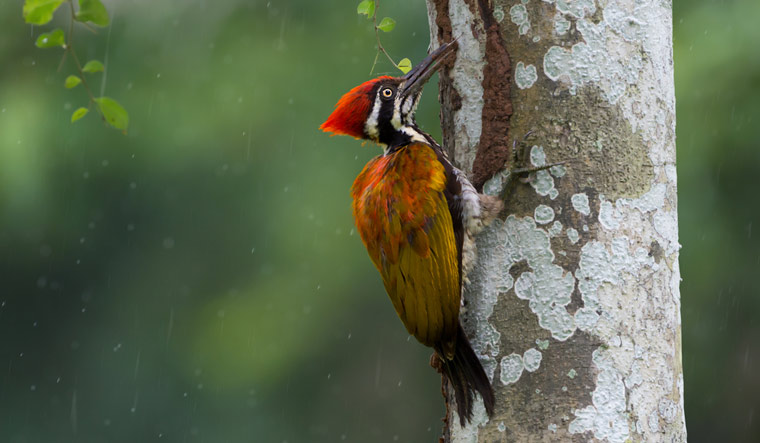 Researchers led by Matthew Fuxjager at Brown University, U.S. and Eric Schuppe at Wake Forest University, U.S. have found regions in the woodpecker forebrain that show characteristics that until now have only been associated with vocal learning in animals and language in humans. Publishing in the open access journal PLOS Biology on September 20th, the study shows that instead of being related to vocalization, activity in these brain regions is related to the characteristic tree drumming that gives woodpeckers their name.

Scientists study songbirds because human language and birdsong have many similarities. Both are learned when young, require complex muscle coordination, and are controlled by specialized regions of the brain. Both humans and songbirds express a marker gene in these regions called PV (parvalbumin), which has never been found in discrete nuclei within the forebrain of vocal birds that do not learn their vocalizations. However, when checking for PV gene expression in several types of birds that had not previously been examined, including flamingos, ducks, penguins, and woodpeckers, the researchers surprisingly found that woodpeckers do have specialized regions of the brain that make parvalbumin, and that these areas are similar in number and location to several of the forebrain nuclei that control song learning and production in songbirds. In open field tests with woodpeckers, they discovered that the birds’ behavior that triggered brain activity in these regions was actually their rapid drumming, and not their vocalizations.

Like birdsong, woodpecker drumming is used to defend territories, requires rapid and complex motor movements, and must be adaptable when birds compete with each other. Although scientists have not yet established that drumming is a learned behavior, this new evidence from the brain predicts that it is. Finding this system for non-vocal communication that is both neurologically and functionally similar to the song system can help us understand how existing brain systems evolve and become co-opted for new, but similar functions.

Fuxjager adds, “Woodpeckers have a set of specialized brain areas that control their ability to drum, or rapidly hammer their bill on trees (and gutters!) during fights with other birds. Furthermore, these brain areas look remarkably similar to the parts of the brain in songbirds that help these animals learn to sing.”