'Not easy to bring back cheetahs from extinction'

Have to be realistic about losses: Cheetah expert 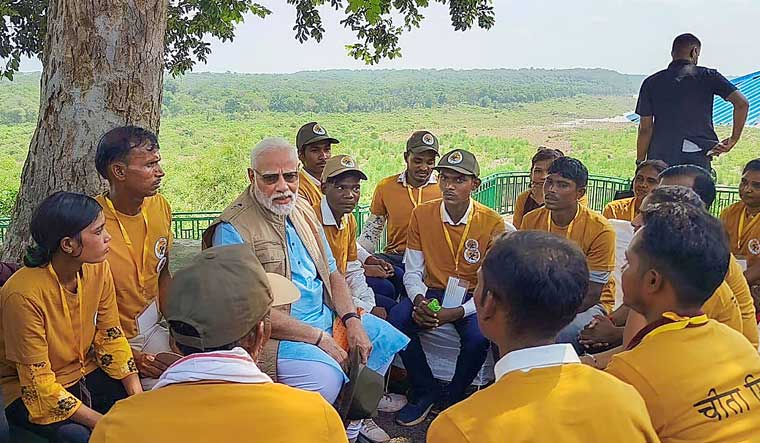 The first generation of reintroduced cheetahs in India may have to be monitored their entire life, says Cheetah Conservation Fund (CCF) founder Dr Laurie Marker, stressing that success in such projects is "not a quick, easy thing".

The cheetahs that have been brought from Africa are used to predators such as leopards and lions. However, there can be losses due to interaction between the species in India, the American zoologist and researcher told PTI in an interview.

The CCF has closely assisted Indian authorities in re-introducing cheetahs in the country. Since 2009, Marker has been to India several times to conduct site assessments and draft plans.

"We are probably looking at a success potentially in 20 years or more. The numbers will be getting augmented from Namibia and South Africa, which will keep the genetics clean and growing," she said. 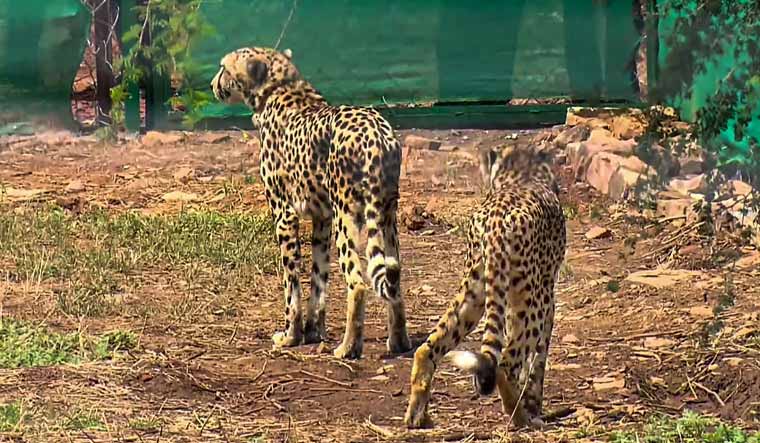 Cheetahs after being released inside a special enclosure of the Kuno National Park in Madhya Pradesh Sept. 17, 2022 | PTI

Asked about the factors conservationists would be looking at to measure the project's success, Marker said, "We look at the adaptation of these animals, their hunting and reproduction, and we are hoping that there will be more reproduction than mortality. There should be a viable population, which should be a larger number."

"We will also be looking at other habitats for the animals to be moved into -- which should be a metapopulation -- and then we have to manage them. So, it is a very long and complex process," she said.

Metapopulations are spatially separated populations of the same species which interact at some level.

Marker said she wants people in India and the world to realise that success (in such projects) is not a "quick easy thing and takes a lot of time".

She said the cheetahs may have to be monitored for their entire life as following these animals as "the first ones on the ground" will be extremely important for research.

"We usually do that for the first generation of re-introduced animals to find out everything about them. They have been radio-collared for a certain period of time, and if allowed, we can re-collar them as well," Marker said.

The animals have been fitted with satellite collars to enable scientists to track their movements and monitor their health status.

After their 30-day stay in the quarantine enclosure, the cheetahs would be released into a larger enclosure spanning more than six square kilometres to become familiar with their new environment, where they would remain for at least a month before being released into the national park.

Their movements would be monitored by research teams, and if an individual cheetah strays too far afield, it would be brought back.

In semi-arid regions of Namibia, cheetahs utilise their huge home range of about 1,500 sqkm while the Kuno National Park (KNP) is spread over just 748 sqkm

The CCF and Indian authorities believe the cheetahs' home range size requirements in India is likely to be "lower due to the more productive habitats".

"We hope that they will not leave (the park). Ideally, they will stay in the area. Their home ranges are also dependent on the amount of prey that's available to them and there is quite a bit of prey (at Kuno) and I hope the habitat is going to keep them there," the cheetah expert said.

"This is all research, a question It's the first time and we cannot answer any of these things. All we can do is put the best science we have forward to be able to second-guess what these cheetahs are going to do, and plan accordingly," she added.

On the likelihood and the results of the cheetahs' interaction with leopards, Marker said the two species co-exist in Namibia and "several of these cheetahs come from areas having lions".

"There are tigers where they are right now and I don't think it will actually be a problem. However, there can be losses as living in the wild is not a fairy tale. The animals are used to other predators but we will have to be very realistic. Re-introductions are not easy. Bringing an animal back from extinction is not an easy process," she said.

Leopards in KNP -- nine per 100 sqkm -- are a big cause for concern for authorities. In Africa, leopards are known to attack adult cheetahs, and spotted hyenas kill cheetah cubs.

KNP has occasionally reported the presence of tigers dispersing from the Ranthambhore Tiger Reserve, Rajasthan, which is just 80 km away.

She said the CCF teams will be in India as long as it is required.

"We will be coming and going from here regularly to work very closely together with the teams on the ground here," Marker said.

A CCF introduction team, which accompanied the cheetahs to India, will observe and provide assistance with veterinary care and handling through their transition from the fenced holding area into the national park.

The team will also support the KNP staff and field officers for an indefinite period.

The cheetah has come back to India 70 years after the species was declared extinct in the country in 1952 largedly due to coursing, sport hunting, over-hunting and habitat loss.

Prime Minister Narendra Modi released the first batch of eight cheetahs five females and three males from Namibia into a quarantine enclosure at the KNP on his birthday on September 17.