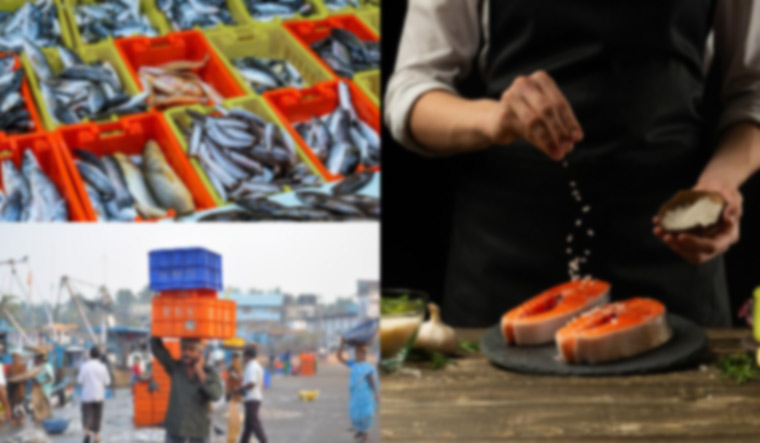 Just under a decade ago the garment industry faced a reckoning: in April 2013 Bangladesh's Rana Plaza building collapsed, killing more than 1100 people and injuring thousands of others. It had housed five garment factories.

The disaster spotlit the unethical and inhumane conditions women and children endure in the fast-fashion supply chain and led to international pressure for improvements. Illegal fishing is increasingly under similar pressure. It too is responsible for human rights abuses as well as environmental harms.

A recent study looked at supply-chain transparency initiatives in three industries to see how lessons learned might help stop the trade in illegal catch.

Recent estimates suggest 7.7 to 14 million tonnes or up to USD 17.2 billion of unreported catches are traded illicitly each year. Illegal fishing puts additional pressure on small-scale fishers who rely on the resources to live. Illegal fishers break rules designed to sustainably manage fish stocks for example, by catching non-targeted species such as sharks and dolphins and using destructive gear like driftnets where prohibited, damaging reefs and the natural environment. Illegal fishers may also avoid licence fees and underreport their catch.

The last 10 to 15 years have seen a stronger push to trace catches from bait to plate' by requiring each company in the supply chain to disclose where their fish comes from and ensure it is caught legally.

In 2020 Japan passed a law requiring all catch and transfers of seafood to be submitted to the government for a certificate of legal catch. The law was similar to regulations introduced by the European Union and the United States. Australia, Chile, Ecuador, Indonesia, Mexico, Morocco, Peru, the Philippines and Taiwan have also signalled their interest in expanding transparency in internationally wild-caught seafood. These efforts are crucial, but their ability to change real-life practices is still to be measured and changing what fishers do is the only way to stop the problem at its core.

The fisheries industry is not the first to face global sustainability pressures, yet it is often analysed separately from land-based sectors a lost opportunity to learn from industries with similar features. The global supply chains of the fashion and textile industry include large corporations whose operations can have significant environmental impacts just as illegal fishing does.

Voluntary transparency initiatives have been widely encouraged from the 1990s and early 2000s throughout the fashion industry, in extractive industries such as oil and gas, and in logging.

Global brand Nike was among the first to increase transparency in the apparel industry. In the 1990s it began disclosing information such as the names and labour practices of its suppliers. Over time, companies such as Levi-Strauss and Nudie Jeans moved towards fuller traceability of fibres from production to supply.

Multiple voluntary labelling initiatives such as Fairtrade began to disclose supply-chain information, including supplier names and labour practices where they had sourced their cotton. Cotton makes up nearly half of all fibres used in the apparel industry. Tracking organic cotton is a complex challenge given the variety of fibres involved in production. Many companies have since also adopted the Better Cotton initiative, which supports cotton producers to meet sustainability standards across environmental, social and management criteria rather than focusing on enforcement. But there are no accredited third parties to independently verify compliance, so the system is not fully traceable.

To combat illegal logging consumers have pushed companies to purchase timber certified by the Forest Stewardship Council as sustainably managed. The EU introduced a timber regulation in 2010 putting the onus on importers to ensure timber entering the market is traceable.

Similarly, to combat corruption in oil and gas concessions, more than 50 governments have signed up to the Extractive Industries Transparency Initiative requiring them to disclose the terms of sales.

Each voluntary initiative was led by civil society organisations, with varying sustainability standards and compliance. As companies expand internationally, the risk of being caught out by consumers, along with pressure from civil society groups, is one of the main drivers of supply-chain transparency.

Governments and markets from wealthier economies have largely been the ones to support these initiatives, often targeting resources and producers from lower-income economies. In the case of the fishing industry, initiatives to increase transparency will need to address the power imbalance between larger companies and small-scale producers and processors.

Each industry is unique, with important differences that determine how effective transparency initiatives will be in enhancing sustainability. But some common features suggest lessons for policymakers tackling illegal fishing: - where governments have not required seafood supply-chain transparency, voluntary initiatives may help fill the gap.

- advances in technology, such as blockchain, will make transparency more likely, as they improve information disclosure and tracking along the supply chain.

These examples show there has been clear demand for more transparency in the supply chains of international industries. To be effective, similar initiatives in the fishing sector will depend on continued pressure from governments, international organisations and consumers.