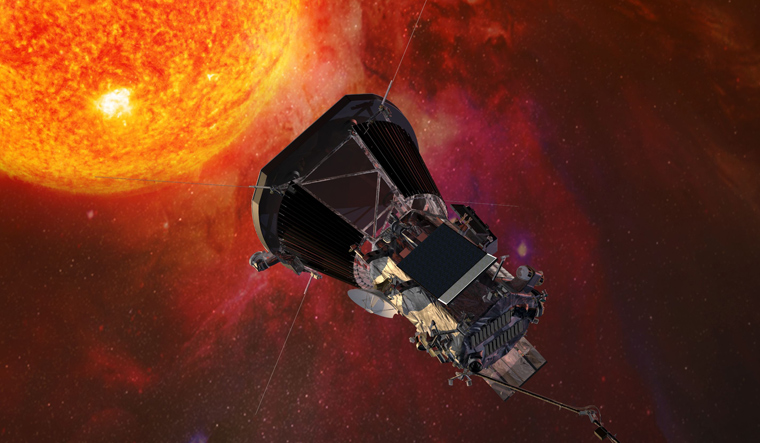 The Parker Solar Probe has officially “touched” the sun, flown through the outer atmosphere of the Sun or corona. Three years after launch and decades after the first conception, Parker has finally arrived. The NASA spacecraft actually flew through the unexplored corona in April during the spacecraft’s eighth close approach to the sun. Scientists said it took a few months to get the data back and then several more months to confirm.

Parker was 13 million kilometers from the center of the Sun when it first crossed the jagged, uneven boundary between the solar atmosphere and outgoing solar wind. The spacecraft dipped in and out of the corona at least three times, each a smooth transition, according to scientists. For the first time in history, a spacecraft has sampled particles and magnetic fields in the superheated Corona.

During the flyby, Parker Solar Probe passed into and out of the corona several times. Preliminary data suggest Parker also dipped into the corona during its ninth close approach in August, but scientists said more analyses are needed. It made its 10th close approach last month. The spacecraft will pass close by the Sun 24 times, drawing ever closer to the Sun and diving deeper into the corona until its grand finale orbit in 2025.

The announcement of the spacecraft's passing the Corona was made at the 2021 American Geophysical Union Fall Meeting in New Orleans on Tuesday. The findings were also published by the American Physical Society.

The Sun lacks a solid surface and the corona, which is hotter than the surface of the Sun is where the action is; exploring this magnetically intense region up close can help scientists better understand solar outbursts that can interfere with life on Earth.

A thermal shield made of carbon-composite material that can withstand up to 1377 degrees celsius is protecting the spacecraft and all the equipment inside it. 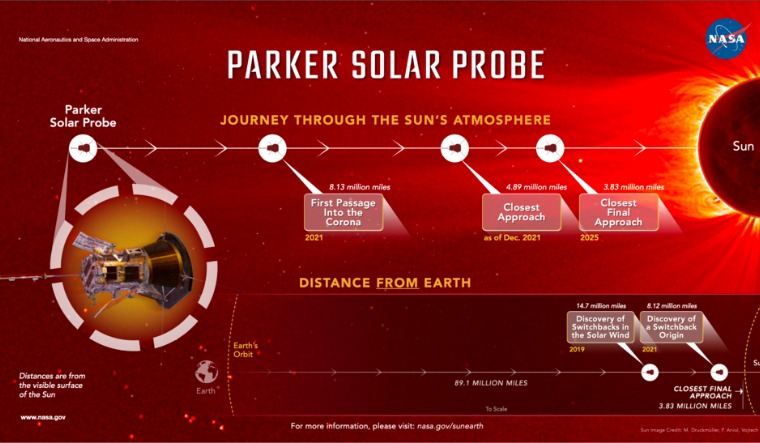 “The first and most dramatic time we were below for about five hours ... Now you might think five hours, that doesn’t sound big,” the University of Michigan’s Justin Kasper told reporters. But he noted that Parker was moving so fast it covered a vast distance during that time, tearing along at more than 100 kilometers per second.

The outer region of space is dominated by solar wind and the size of the corona is also driven by solar activity. As the Sun’s 11-year activity cycle—the solar cycle—ramps up, the outer edge of the corona will expand, giving Parker Solar Probe a greater chance of being inside the corona for longer periods of time.

Future coronal excursions will help scientists better understand the origin of the solar wind and how it is heated and accelerated out into space, said project scientist Nour Raouafi of Johns Hopkins University.