At present, India has 100 GW of installed renewable energy capacity 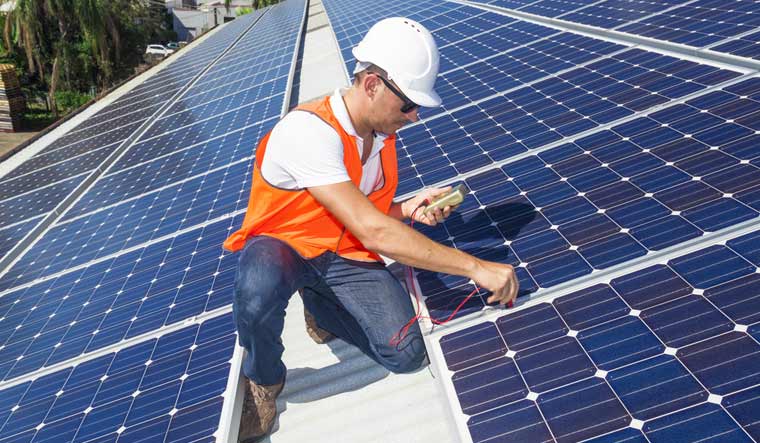 India should increase its solar power capacity to 5630 gigawatt in order to become a net-zero emissions nation by 2070, according to a study.

"India's total installed solar power capacity would need to increase to 5630 GW if it were to commit to achieving net-zero greenhouse gas emission by 2070," the study titled 'Implications of a Net-zero Target for India's Sectoral Energy Transitions and Climate Policy' said.

The country would also need to develop the requisite recycling capacities to handle the solar PV (photovoltaic) waste generated, it said.

The study further said that to achieve net-zero target by 2070, usage of coal especially for power generation would need to peak by 2040 and drop by 99 per cent between 2040 and 2060.

Further, the consumption of crude oil across sectors would also need to peak by 2050 and fall substantially by 90 per cent between 2050 and 2070.

Vaibhav Chaturvedi, Fellow, CEEW, said, "As we move towards a net-zero future, energy prices could rise in the short run and workers that are a part of the fossil-fuel economy could lose jobs. "Hence, developed countries should offer generous financial and technological support to the developing ones to help them set ambitious goals regarding emissions reduction while ensuring a just transition."

Arunabha Ghosh, CEO, CEEW, said, developed economies should significantly advance their target of achieving net-zero and not wait till 2050.

This will give developing countries room to pursue a just and sustainable energy transition, the CEO said.

To meet the target, India should also co-invest and co-develop new green technologies in partnership with other countries to create new jobs and markets. Green hydrogen is one such technology that could replace coal in the industrial sector, Ghosh said.

According to the CEEW study, in 2070, electric or battery-driven passenger vehicles would comprise 84 per cent of total cars sold in the country.

Around 79 per cent of all trucks would run on battery-electric technology and rest on hydrogen. Households across the country would also have to use electricity as the primary cooking fuel. CEEW is a not-for-profit policy research institution.