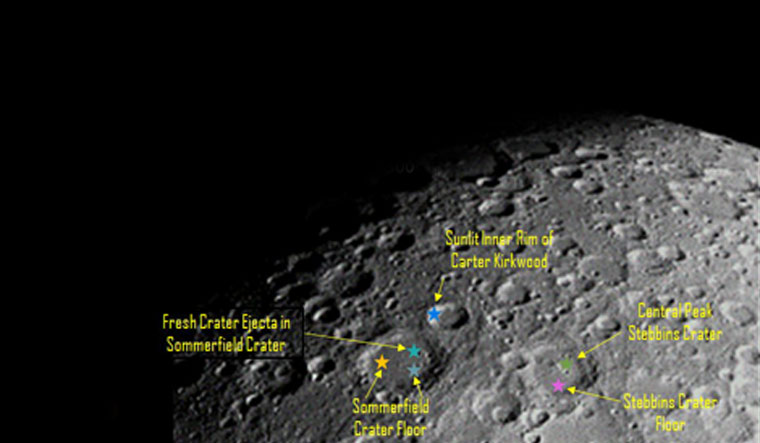 Chandrayaan-2, ISRO's second lunar mission, has detected the presence of water ice in the regions of the Moon that do not receive sunlight. Scientists have been trying to find water in the form of ice from Permanently shadowed regions(PSRs) since they are exremeley cold.

The Dual Frequency Synthetic Aperture Radar (DFSAR) has detected an unambiguous presence of water ice at the permanently shadowed regions of the Moon, revealed scientists of the Indian Space Research Organisation (ISRO) on Tuesday, the second day of a two-day lunar science workshop

PSRs have not been studied before as sunlight does not fall on them and getting images are extremly difficult.

DFSAR, one of the eight payloads on board Chandrayaan-2, has capability to combine radar images from two wavelengths, making it possible to differentiate surface roughness properties from water ice properties.

The radar instrument has located potential patches of “dirty ice” within the Cabeaus crater on the lunar south pole.

Patchy dirty ice are ice crystals mixed with the lunar regolith that covers the bedrock of moon extending upto three to four metres. They consist of loose depositsand are not continuous sheets of ice.

“This is very very essential to get information on what kind of impact cratering took place and how the impact melts distributed around the craters,” said Anup Das of Ahmedabad’s SAC and part of the DFSAR science team, during his presentation.

Chandrayaan-2 mission director Ritu Karidhal expressed the confidence that after two years of operation, the propellant is enough to support four more years of life.

Planned to land on the South Pole of the moon, Chandrayaan-2, the most complex mission ever attempted by India's space agency, was launched on July 22, 2019. However, lander Vikram hard-landed on September 7, crashing India's dream to become the first nation to successfully land on the lunar surface in its maiden attempt.

However, the orbiter of the mission is working fine and has been sending data to Chandrayaan-1, the first lunar mission.