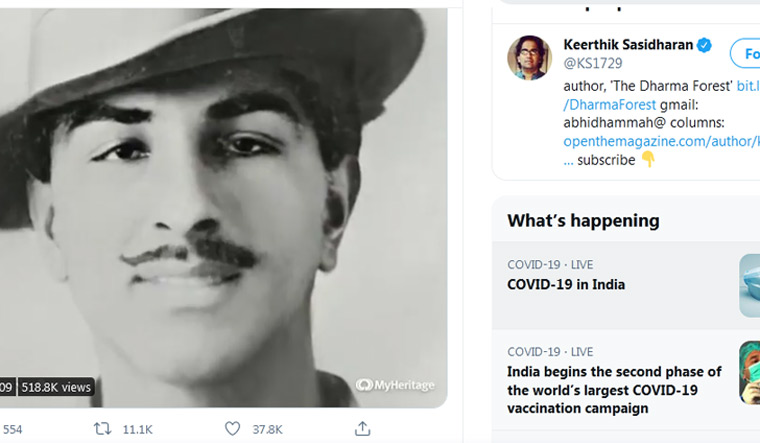 Screengrab from the animated video of Bhagat Singh | Twitter

Netizens are so euphoric over animated videos of freedom fighters that comes to life when clicked!

Keerthik Sasidharan, the author of The Dharma Forest, has made animations of freedom fighters and historical figures like Bhagat Singh, Swami Vivekananda, Lokmanya Tilak, Kasturba Gandhi, Aurobindo and Munshi Premchand that start moving once you hit the play button and they look exceptionally real.

"Swami Vivekananda probably would have laughed at such algorithmic efforts to reanimate photos, but as a great believer in the powers of science to improve material aspects of human lives, he would have probably wanted to understand the details of how it all works," tweeted Sasidharan.

"Kind of surreal to take a photo of the singularly inspiring Bhagat Singh -- a revolutionary voice in 1920s India, who was hung by the British in 1931, at the age of 24 -- run it through the Heritage AI algorithm, and see him reanimated," Sasidharan described in his tweet.

A collection of old pictures of freedom fighters were recreated using Deep Nostalgia, which is a new AI-powered tool made by machine learning researchers.

The software from the online family tree service MyHeritage gives new life to old photos. The  system can recreate lifelike motion from just a single frame of photo or painting. Facial expressions like wink, smile, nod, and turning head can be added to portrait photos using machine leaning. The user can select pictures from group photo as well.

The created MP4 files can also be posted on social media.

However, the service does not permit the user to create "deepfake" videos of anybody without permission and therefore a watermark will be shown as a proof that the animations are generated by computer.

Though a users can sign up for a free account, they need to purchase a subscription plan to use Deep Nostalgia after a few animations.