Mere keyhole wasp can bring down an airplane 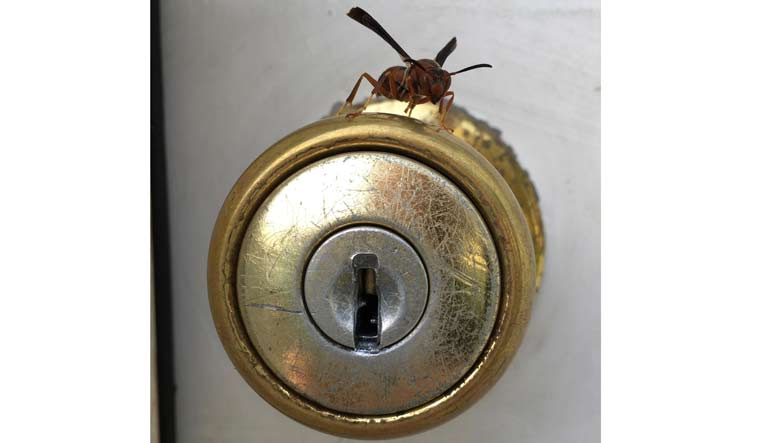 A new study finds that invasive keyhole wasps at the Brisbane Airport were responsible for a series of serious safety incidents involving pitot probes.

The study by Alan House of Eco Logical Australia and colleagues underscore the importance of risk-mitigating strategies, such as covering pitot probes when aircraft arrive and setting up additional traps to intercept the wasps.

Over a period of 39 months, invasive keyhole wasps at the Brisbane Airport were responsible for 93 instances of fully blocked replica pitot probes—vital instruments that measure airspeed.

Interactions between aircraft and wildlife are frequent and can have serious financial and safety consequences. But the risk posed by wildlife when aircraft are on the ground is much less understood, and specific threats posed by insects have not been quantified before.

In the new study, published in the open-access journal PLOS ONE, House and his colleagues investigated the possible role of keyhole wasps (Pachodynerus nasidens) in obstructing pitot probes at Brisbane Airport.

A total of 26 wasp-related issues were reported at the airport between November 2013 and April 2019, in conjunction with a series of serious safety incidents involving pitot probes.

In its native range in South and Central America and the Caribbean, the wasp is known to construct nests using man-made cavities, such as window crevices, electrical sockets, and of course, keyholes.

The researchers used 3D-printing technology to construct a series of replica pitot probes, which they mounted at four locations at the airport. All nests in these probes were made by keyhole wasps, and peak nesting occurred in the summer months.

Nesting success (i.e., the proportion of nests producing live adults) was optimal between 24 and 31°C, and probes with apertures of more than 3 mm in diameter were preferred. The majority of nests were constructed in one area of the airport. The proportion of grassed areas within 1000 m of probes was a significant predictor of nesting, and the nest volume in pitot probes may determine the sex of emerging wasps.

"We hope this research will bring attention to a little known but serious issue for air travel in tropical and sub-tropical regions. Having found its way across the Pacific Ocean, there is no reason to doubt that it could spread to other parts of Australia. The consequences of not managing this clever but dangerous pest could be substantial,” the authors said.