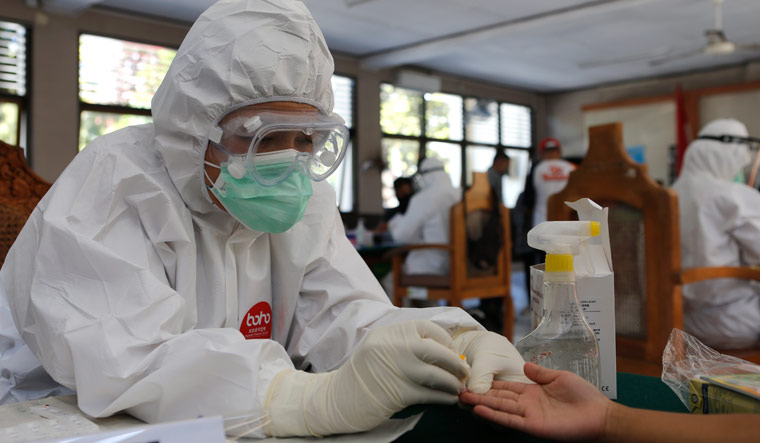 The novel coronavirus which causes COVID-19 may relieve pain, according to a new study which could explain why nearly 50 per cent of the infected people experience few or no symptoms, even though they are able to spread the disease.

According to the scientists, including Rajesh Khanna from the University of Arizona in the US, nearly half of COVID-19 transmission occurs prior to the onset of symptoms, and 40 per cent of COVID-19 infections are asymptomatic.

“It made a lot of sense to me that perhaps the reason for the unrelenting spread of COVID-19 is that in the early stages, you’re walking around all fine as if nothing is wrong because your pain has been suppressed,” Khanna said.

In the research, published in the journal PAIN, the scientists raised the possibility that pain, as an early symptom of COVID-19, may be reduced by the coronavirus spike protein as it silences the “body’s pain signalling pathways”.

Later in June, two studies published in the preprint server bioRxiv pointed to neuropilin-1 as a second receptor for SARS-CoV-2, the researchers said.

“That caught our eye because for the last 15 years my lab has been studying a complex of proteins and pathways that relate to pain processing that are downstream of neuropilin,” said Khanna.

“So we stepped back and realised this could mean that maybe the spike protein is involved in some sort of pain processing,” he added.

One of the biological pathways signal through which the body feels pain is via a protein named vascular endothelial growth factor-A (VEGF-A) that plays an essential role in blood vessel growth but also has been linked to diseases such as cancer, and rheumatoid arthritis, the scientists said.

They added that most recently this protein has been linked to COVID-19.

Like a key in a lock, when VEGF-A binds to the receptor neuropilin, it initiates a cascade of events resulting in the hyperexcitability of neurons, which leads to pain, the study noted.

Khanna and his research team found that the SARS-CoV-2 spike protein binds to neuropilin in exactly the same location as VEGF-A.

They performed a series of lab experiments, and in rodent models to test their hypothesis that the SARS-CoV-2 spike protein acts on the VEGF-A/neuropilin pain pathway.

The researchers used VEGF-A as a trigger to induce excitation of nerve cells which create pain, then added the SARS-CoV-2 spike protein.

The scientists further examined neuropilin as a new target for non-opioid pain relief.

During the study, Khanna tested existing small molecule neuropilin inhibitors developed to suppress tumour growth in certain cancers and found they provided the same pain relief as the SARS-CoV-2 spike protein when binding to neuropilin.

“We are moving forward with designing small molecules against neuropilin, particularly natural compounds, that could be important for pain relief,” Khanna said.

“We have a pandemic, and we have an opioid epidemic. They’re colliding. Our findings have massive implications for both. SARS-CoV-2 is teaching us about viral spread, but COVID-19 has us also looking at neuropilin as a new non-opioid method to fight the opioid epidemic,” he added.