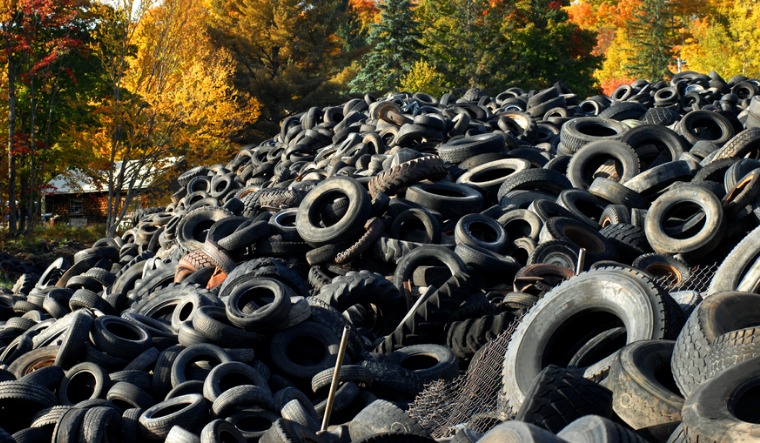 Scientists may have found a solution to a major environment problem owing to the damage that used tyres cause when they are stored in the environment. Discarded tyres pose an increased threat as they contain chemicals and heavy metals that seep into the environment when they decompose over the years. Moreover, disposed tyres could become breeding grounds for mosquitoes.

Millions of tons of tyre waste is generated every year. They are emerging in ever greater numbers, so revalorising them is a subject that is attracting great interest and is being spurred on by the increasingly stringent regulations in terms of their management.

"Pyrolysis is a hugely interesting alternative when it comes to revalorising tyre materials in order to obtain alternative fuels and petrochemical products with high added value. In this context, pyrolysis involves degrading the rubber of the tyre by applying heat in the absence of oxygen. The products and their yield depend on the conditions in which the pyrolysis is carried out," said Miriam Arabiourrutia-Gallastegui, lecturer in the UPV/EHU's PROCAT-VARES (Catalytic Processes-Waste Valorization) group.

In a paper recently published in the journal Renewable and Sustainable Energy Reviews, the research group analysed the most important advantages in valorising used tyres using catalytic pyrolysis. "The main interest in valorising tyre waste by pyrolysis is based on the potential of the products obtained: Gas, liquid and a solid known as char. The yield and composition of each of them depend on the pyrolysis conditions," said Arabiourrutia.

"Liquid is the main product obtained in catalytic pyrolysis. This liquid is basically what is of the greatest interest because it could be used as fuel if it were to be incorporated, for example, into a refinery. Its composition is complex and includes compounds of different types (aromatics, paraffins, olefins and naphthenes), plus sulphur compounds that limit its direct use as a fuel. So the interest in catalytic pyrolysis tends to be linked to the improvement in the properties or yield of this part. So with respect to catalytic pyrolysis, great interest has been placed in the production of chemical products, such as aromatic compounds (benzene, toluene, etc.), because they have commercial applications," explained the UPV/EHU researcher.

"Pyrolysis gases can also be used as fuel to produce energy. Finally, char is the solid left behind that is not degraded and mainly comprises the carbon black present in the tyre; carbon black is the compound that provides the tyre with its anti-abrasive properties. The possible activation of char for use as activated carbon is being explored; it could be reused as carbon black in the manufacture of tyres," Arabiourrutia added.

"In the process we used and based on the use of the conical spouted bed reactor, catalytic pyrolysis has certain, very specific conditions: The time the gases generated… in the reactor is short and that promotes a series of reactions which, for example, lead to the production of a high yield of the liquid part. We have also seen that, more than anything, this process enables the liquid product obtained to be used in refineries to obtain fuel," stressed Miriam Arabiourrutia-Gallastegui.

As the researcher pointed out, "thanks to all these pieces of work, we are gradually adjusting and improving the pyrolysis process to try and bring about a distribution of products with a more suitable composition with a view to their potential application as fuel or raw material to obtain compounds of interest".