Slew of launches as Samsung sets the benchmark for 2020 devices 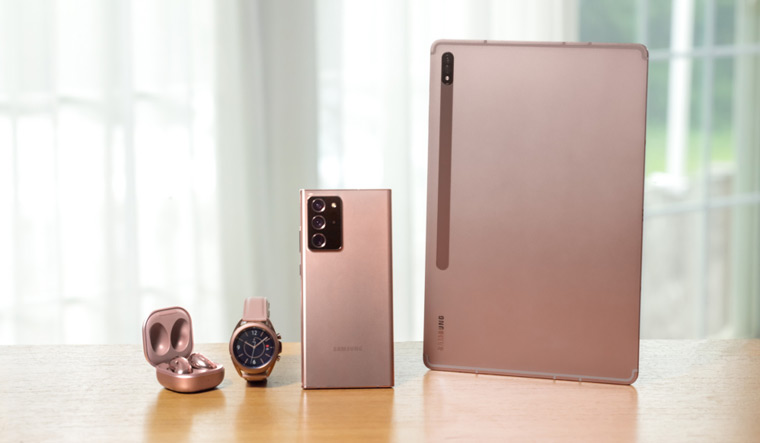 Every year since the first Samsung Galaxy Note released in 2011, the Samsung flagship has become the benchmark for a premium device—one that any top-end iPhone release will inevitably be compared with.

When the iPhone 12 and related gadgets updates are unveiled later this year, possibly in September or in October, Apple will invariably have to face off against what Samsung launched today: The Samsung Galaxy Note 20, Note 20 Ultra, Galaxy Watch 3, Galaxy Buds Live, Galaxy Z Fold 2, and Galaxy Tab S7 and S7+.

The Note 20 Ultra, which is meant to represent the premium flagship range of Android devices, comes standard with 5G; a far-seeing move since flagship device owners are likely to retain their phones for a few years, by which point 5G will be available in several markets.

The Note 20 Ultra comes with a triple-camera setup on the back. This includes a 108MP main sensor with a 12MP camera on the back capable of recording 8K videos, a 12MP periscope lens with 5x optical zoom and a bright f/3.0 aperture and 50x “space zoom”, and a 120-degree ultra wide-angle with a 12MP sensor.

The 6.9” Note 20 Ultra, Samsung’s highest offering yet, features a higher-refresh rate screen than the 6.7” Note 20; it also has a better version of Gorilla Glass with the latest “Victus” glass which Corning claims can survive falls of up to two metres and that is twice as scratch resistant as its predecessor. The Note 20 has a lower resolution at FHD+ (2,400x1,080). The Infinity-O display on both phones looks a stunner, with one of the best implementations of hold punch selfie camera yet.

The Note 20 Ultra has a 1440p+ resolution Dynamic AMOLED 2x display, capable of putting out 1500 nits, making it one of the brightest displays yet. This display is capable of 120hz while the one on the Note 20 is not—although the 120Hz mode will only be available at FHD+ resolutions.

While the Note 20 comes with 8GB of LPDDR5 RAM, the Note 20 Ultra will have 12GB. Both phones come with an IP68 waterproof rating.

The S-Pen has been updated to have around five times less latency as well as better gesture controls.

The Galaxy Watch 3 gets an upgrade: It is now slimmer and lighter while also packing a larger display, but this comes at the cost of reduced battery life compared to the Watch 2. However, the Watch 3 now looks more fashionable. The Galaxy Watch 3 can measure blodo oxygne, blood pressure and even electrocardiogram readings (in certain markets) and has fall detection as well as emergency SOS feature.

The Galaxy Buds Live pack 12mm drivers as well as a bass duct, along with active noise cancellation, low audio latency, and up to six hours of playback when fully charged. Three built-in mics promise exemplary call quality. There is also Spotify integration. At $169.99, it significantly undercuts the price of Apple’s equivalent Airpods Pro.

The 12.4” Tab S7+ packs a 120Hz AMOLED display and comes with the new upgraded S-Pen. The tab is powered by a Snapdragon 865+ chipset and comes with enhanced Microsoft Office integration as well as four AKG speakers.

The Galaxy Z Fold2 was not fully unveiled but a few details emerged: The internal screen is bigger than the previous version at 7.6” and the glass is also an improved “Ultra Thin Glass” boasting better image quality. More details on this will be announced on September 1.

The Note 20 series is expected to go on sale from August 21.