Poaching has been ruled out as the cause of death, as the carcasses were found intact 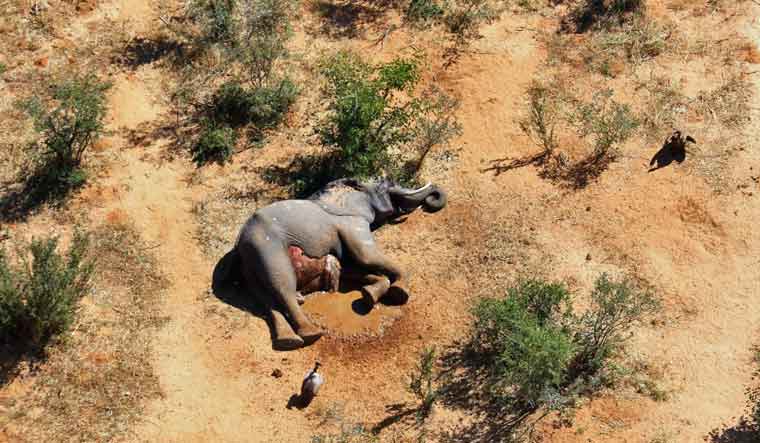 A dead elephant is seen in this undated handout image in Okavango Delta, Botswana | Reuters

According to local conservationists, more than 360 elephants have died under mysterious conditions over the last three months. Authorities at the Okavango Panhandle region have been trying to discover the cause of the deaths of these elephants, some of them, who have simply fallen on their faces.


Poaching has been ruled out as the cause of death, as the carcasses were found intact. “Three laboratories in Zimbabwe, South Africa and Canada have been identified to process the samples taken from the dead elephants,” the Ministry of Environment, Natural Resources, Conservation and Tourism was quoted as saying in a Reuters report.


In a report prepared for the government and viewed by Elephants Without Borders, a conservation organisation, elephants of all ages appeared to be dying. Carcasses were first noticed in May. 169 dead elephants were counted on May 25 and 187 more on June 14.


“Several live elephants that we observed appeared to be weak, lethargic and emaciated. Some elephants appeared disorientated, had difficulty walking, showed signs of partial paralysis or a limp,” the report said.”One elephant was observed walking in circles, unable to change direction although being encouraged by other herd members.”


The possible cause of deaths among the elephants was probably disease or poisoning. Botswana, home to almost a third of the continent's elephants, has seen numbers grow to 130,000 from 80,000 in the late 1990s. Farmers in the region see the elephants as a nuisance as their crops have been destroyed.


Niall McCann, director of conservation at United Kingdom charity National Park Rescue feels that tusks lying around on so many elephant carcasses is an invitation for thieves. A ban on elephant hunting was imposed in 2014.