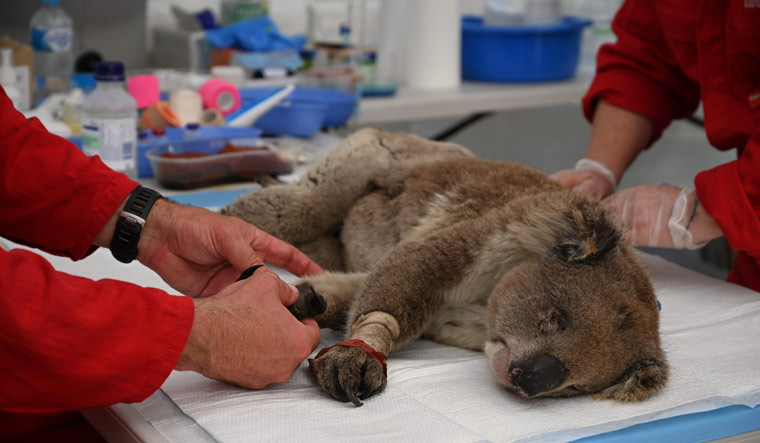 The Australian government on Monday said it could declare Koalas as an "endangered" species after thousands of koalas were wiped out in the unique blaze that started in September.

Environment Minister Sussan Ley said the country's koala population had taken an "extraordinary hit" as a result of bushfires that have raged for months.

Tthe raging Australian bushfires, one of the worst in its history, has killed at least 26 people, burned over 10 million hectares of land, destroyed over 2,000 homes and pushed many species towards extinction.

Over 1.25 billion animals are believed to be dead in the wake of bushfires and experts believe that hundreds of billions of insects may have been wiped out, the Australian Broadcasting Corporation (ABC) reported.

The government has established a 50-million Australian dollar emergency fund to address the devastating loss of wildlife.

Announcing the funding commitment, Environment Minister Sussan Ley said Australia's koala population has taken an "extraordinary hit" in the ongoing bushfires and could be listed as "endangered".

The Threatened Species Scientific Committee will need to assess whether koalas have moved from a 'vulnerable' listing to being 'endangered' in some parts of the country, she said.

Koala populations across the country are not all impacted by the fires. Koalas are listed as vulnerable in northern New South Wales (NSW) and south-east Queensland, and the fires have likely put them under more pressure there, The Sydney Morning Herald reported.

With 30 per cent of their habitat already been destroyed in the devastating bushfires, koalas -- the herbivorous marsupial animal native to Australia -- have become a big focus for the Australian government.

"We know that our native flora and fauna have been very badly damaged. It will be some time before we know what that means for their numbers (and) koalas will be a big area of focus for us," Environment Minister Ley said.

"It may be necessary...to see whether in certain parts of the country, koalas move from where they are, which is often vulnerable, up to endangered," she said.