Australian bushfires partly due to late monsoon ending in India 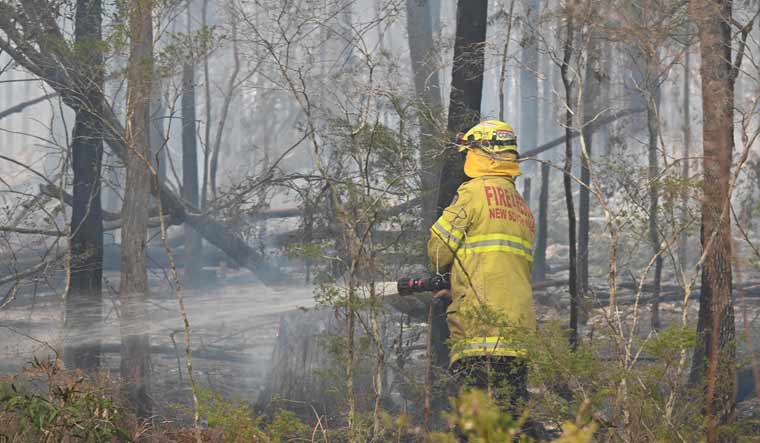 The catastrophic bushfires in Australia, which killed three people and displaced thousands, is partly due to the monsoon season ending late in India, according to an expert.

Trent Penhman, who is associated with the University of Melbourne and studies the behaviour and formation of bushfires using real depictions of fuel, weather and topography, said the bushfires could be partly explained by monsoon season ending late in India, the state-run Australian Broadcasting Corporation (ABC) News reported on Sunday.

Australian state of New South Wales (NSW) is struggling to deal with unprecedented bushfire season this year, which till now has killed three people, displaced thousands and destroyed over 150 homes.

"The global systems are all linked and  we can't dissociate them. But  if you're sitting in one area its very hard to imagine that the weather 10,000 kilometres away is actually going to have an impact," Penham said.

He said the record breaking rainfalls did not exit India until mid October.

"The record breaking rainfalls did not end from India until mid last month while the south-west monsoon in Asia typically ends between June and September every year and those winds then leave the region and move south," Penham said, adding that the situation had led to a delay to the big wet in Darwin and therefore left the eastern coast dry and fire-prone.

"The rain that may normally occur in these regions at this time hasn't actually come down due to that global event. And so because of that these regions are hot, dry and windy. These are the perfect conditions for extreme fires like what we're seeing at the moment," Penham said.

Due to the bushfires, over 850,000 hectares of land  in NSW have been destroyed since the start of the bushfire season this year, with authorities asking people to plan now and avoid bushfire-prone areas.

A state of emergency was declared on Monday, with authorities describing the crisis as "some of the most devastating bushfires we have ever seen".

It is the first time the Sydney region, including the Blue Mountains and Central Coast, has faced a catastrophic warning in the 10-year history of fire danger ratings.

Anthony Clark from the regional fire services has warned the coming conditions will be "as bad as it gets.''