US heat wave just warming up for long and scorching weekend

Cities like Chicago, Detroit, New York and Washington D.C. will be affected 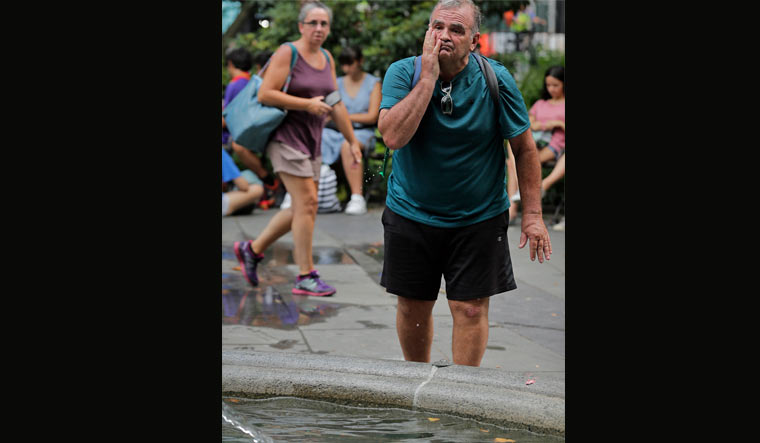 A man splashes water on his face from a fountain in New York. The heat wave that has been roasting much of the US in recent days is just getting warmed up | AP

Met officials are also concerned about smog that is aggravated due to the heat and makes it more difficult to breathe. Communities are preparing by offering buildings as cooling centers and asking residents to check in on relatives and neighbours.

More than 100 local heat records are expected to fall Saturday, according to the National Weather Service.

Temperatures in parts of the East won't drop below the mid- to upper-70s or even 80 degrees (26.7 Celsius) at night, he said.

The wave is expected to be “short and searing” according to Greg Carbin, forecast branch chief for the weather service's Weather Prediction Center. Areas like Texas Gulf Coast and north Iowa could face humidity too.

As per an experimental weather service forecast, nearly hundred local records will be broken and temperatures will be at least 90 degrees for five days.

On Saturday, 101 records could fall in an area stretching from Texas to Iowa and east to Maine and Florida, according to projections. I a deadly heatwave in July 1995, more than 700 people died during a heat wave in Chicago as temperatures rose above 97 degrees (36.1 Celsius). Many of the dead were poor, elderly and lived alone.

Blocks of ice weighing about 300 pounds (136 kilograms) were being trucked in for the polar and grizzly bears, and the zoo planned to give ice cubes to the reindeer. Additional animals were being given access to indoor quarters starting Thursday.

"The welfare of the animals is our top priority," said zoo spokeswoman Sondra Katzen.

At the Lincoln Park Zoo in Chicago, too, animals have cooling stations in their enclosures and space off-exhibit where they can go to cool down, said general curator Dave Bernier.