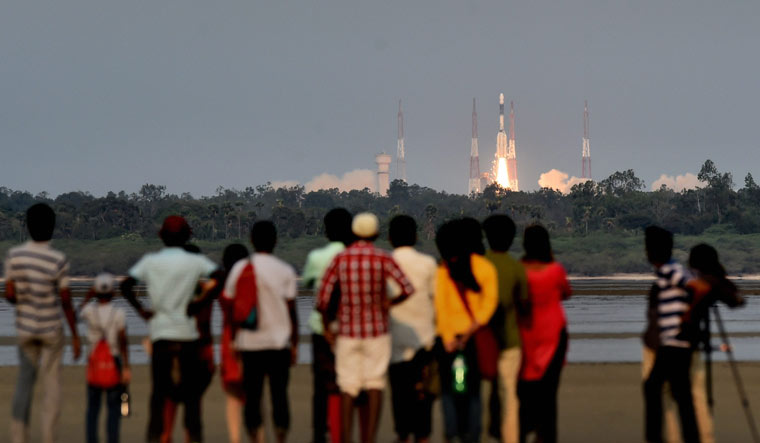 Communication from the GSAT-6A satellite launched on March 29 has been lost and efforts are underway to establish a link with it, the Indian Space Research Organisation said today, after maintaining an unusual silence on the health of the spacecraft.

The second orbit raising operation of GSAT-6A has been successfully carried out by Liquid Apogee Motor (LAM) Engine firing for about 53 minutes on March 31, in the morning, the ISRO said in a statement.

But, after the successful long duration firings, when the satellite was on course to normal operating configuration for the third and the final firing, scheduled for April 1, communication from the satellite was lost, the space agency said on its website.

"Efforts are underway to establish the link with the satellite," it added.

The ISRO had successfully put into orbit its latest communication satellite GSAT-6A after a perfect launch of its powerful geosynchronous rocket (GSLV-F08), from its spaceport in Sriharikota in Andhra Pradesh. The satellite would help in mobile communication even from very remote locations through hand-held ground terminals.

The space agency's unusual silence regarding the satellite had lead to speculation about the health of the spacecraft.

The 2140-kg communication satellite GSAT-6A is aimed at helping in mobile communication even from very remote locations through hand-held ground terminals.

With a mission life of about 10 years, GSAT-6A is aimed at providing a thrust to mobile communication through multi-beam coverage facility.It is expected to be a shot in the arm for the armed forces.

ISRO Chairman K. Sivan had said post the launch that GSAT-6A was a complement to GSAT6, which was already in orbit, and these two satellites combined will provide a platform for development of advanced technologies.

This is the first mission for Sivan, who assumed charge of the space agency in January.

In August last year, India's mission to launch its backup navigation satellite IRNSS-1H on board PSLV-C39 ended in a failure after a technical fault on the final leg following a perfect launch.

The ISRO then said the heat shield did not separate on the final leg of the launch sequence and, as a result, IRNSS-1H got stuck in the fourth stage of the rocket.