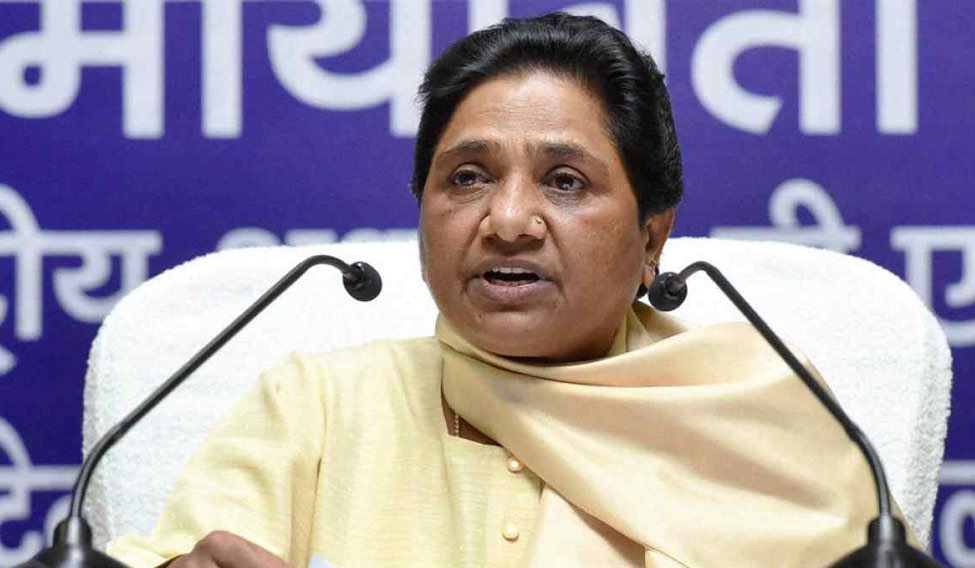 Bahujan Samaj Party supremo and former chief minister of Uttar Pradesh Mayawati on Saturday dubbed the Congress and the BJP as “anti-dalit” and “anti-poor” and called upon the people of Karnataka to be wary of them.

Mayawati was addressing the “Vikasa Parva”, an election rally of the Janata Dal (Secular), after her party entered a pre-poll alliance with the party ahead of the April-May assembly polls in Karnataka.

“Don't get carried away by their manifestos. Vote for our alliance and help us get a clear majority to prevent both the national parties from wresting power,” said Mayawati, who hailed JD(S) state president and former chief minister of Karnataka H.D. Kumaraswamy's “administrative experience and good governance” and expressed confidence in JD(S) supremo H.D. Devegowda's leadership.

Calling the Congress Party as “casteist”, Mayawati recalled how Dr Babasaheb Ambedkar was prevented from entering the Parliament by the Congress by fielding a candidate against him.

“Babasaheb was also denied Bharat Ratna, which exposes the casteist mindset of the Congress. Later on, the Congress government did not even declare a day of mourning when Kanshi Ram ji died,” said the dalit leader and four-time chief minister of UP, who hopes to garner the dalit votes for the alliance in a state where at least 51 constituencies are reserved and the dalit votes have always been a decisive factor in elections.

The atrocities against dalits continue under the BJP rule too, said Mayawati adding that it was not just the Congress, but also the BJP which has neglected the dalits and the poor.

“We have witnessed attacks on dalits, Rohit Vemula in Hyderabad, attacks in Una, Gujarat and in UP under the BJP rule. With the RSS pushing its Hinduvta agenda, minorities and dalits are no longer safe under this regime,” she alleged, and recalled a long political struggle. “My party, for the first time, won three Lok Sabha seats in 1984. We extended outside support to the V.P. Singh government on the condition that Babasaheb would be given the Bharat Ratna award and the Manual Commission report, which mandates job reservations for SC, ST and OBC communities, would be implemented. Mr Singh kept both promises.”

Attacking Prime Minister Narendra Modi, Mayawati asked a huge gathering at the rally if anyone of them had got at least a rupee from Modi as promised.

“In the 2014 polls, Modi had promised to bring back all the black money hidden overseas within 100 days after coming to power and remit Rs 15-20 lakh to every Indian's bank account. Another promise of the BJP was to create employment and alleviate poverty. But the poor have been affected by the hasty implementation of GST and demonetisation without adequate preparation. It is painful to hear the PM advice the youth to sell pakoras, instead of creating jobs for them. Under the BJP rule, even the borders are not safe now,” she said.

Reminding people that the Congress in Karnataka had promised a dalit CM during the 2013 polls, but later went back on their word, she said, “The Congress is anti-dalit and the BJP spreads communal hatred and practices divisive politics in the state as it did in UP and Gujarat. The people of Karnataka should teach both these parties a good lesson.”

With JDS having an voteshare of 19 per cent, the JDS-BSP alliance hopes to mop up the anti-incumbency votes against the Congress, which would otherwise benefit the BJP. The coalition is hoping to consolidate the dalit (24 per cent) and Muslim (13 per cent) and Vokkaliga voters. BSP, which faced its first elections in Karnataka in 1994, bagged a single seat (Syed Zulfikar Hashmi from Bidar). But it made inroads into the state only in 2004 by fielding candidates across 102 seats and polling 1.74 per cent votes.

In the 2013 polls, the BSP had fielded 175 candidates and managed to get only 0.95 per cent of the votes. This time, it remains to be seen if the coalition would result in better seat conversion, though dalits have traditionally voted for the Congress in Karnataka and the BSP does not have a sound base in the state.

During last week's meeting of BSP MP Satish Chandra Mishra and JDS general-secretary Danish Ali Baig, where they signed the pre-poll pact, BSP settled for only 14 out of the 224 seats to contest. However, the development has left BSP leaders in the state upset as they feel the party should be allowed to field candidates in JD(S) bastions too. Meanwhile, the JDS has struck an alliance with NCP chief Sharad Pawar, allowing the NCP to contest from seven seats. JDS leaders inviting even the Left parties to the coalition is being read as an effort to build an “anti-Congress and anti-BJP” platform to strengthen the Third Front in time for the 2019 Parliament elections.

Even as the Left parties and the critics suspect the JDS might enter a power-sharing agreement with either of the national parties like in the past, Kumaraswamy claims that JDS would form the government on its own.

“We will not share power with the Congress or the BJP. We will come to power on our own. If there is a hung verdict, we will go for fresh polls.”

Your form could not be submitted.
This browser settings will not support to add bookmarks programmatically. Please press Ctrl+D or change settings to bookmark this page.
Topics : #Mayawati | #BSP