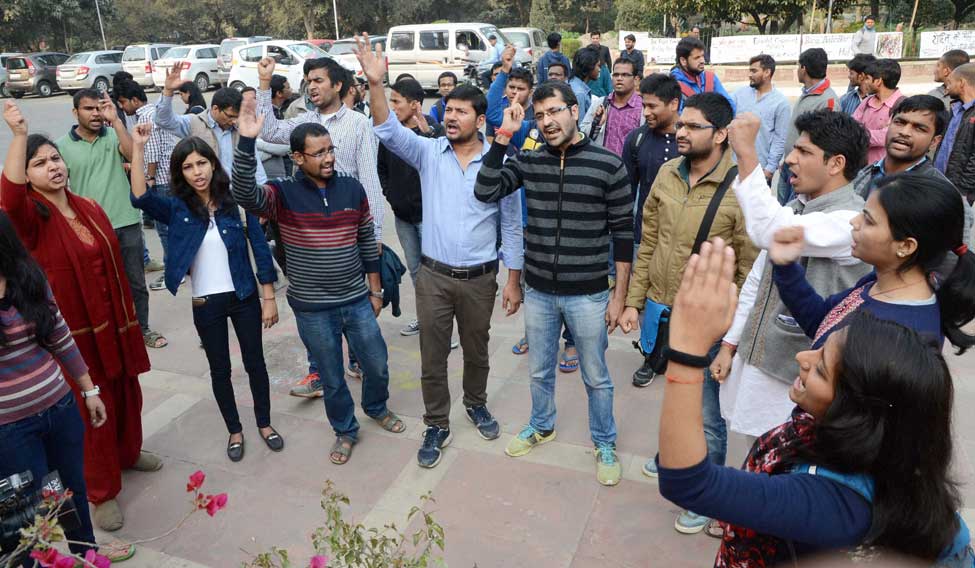 JNU administration on Wednesday ordered a "discplinary" enquiry into holding of an event on campus against the hanging of Afzal Guru despite cancellation of permission, as protests by members of ABVP rocked the university demanding expulsion of the student organisers.

Maintaining that the act by students amounted to "indiscipline" and any talk about disintegration of nation cannot be "national", the university authorities said that the committee headed by the Chief Proctor of JNU will investigate the matter and come up with its report.

"The permission for the programme was sought by giving incomplete information, so it is an act of indiscipline. A committee headed by the Chief Proctor will examine the footage of the event and speak to the witnesses. It is on basis of the report, the varsity will take appropriate action," JNU Vice Chancellor Jagdeesh Kumar said.

Briefing about the "incomplete information", the varsity Registrar Zutshi said, " there was no where mentioned in the permission request that the event will be on Afzal Guru, they just said that they wanted to organise a cultural event. How can any talk about disintegration of nation be national?".

The student organisers of the event had pasted posters across the campus inviting them to gather for a protest march against "judicial killing of Afzal Guru and Maqbool Bhatt" and in solidarity with "struggle" of Kashmiri migrants, at varsity's Sabarmati dhaba on Tuesday.

Members of the ABVP objected to the event and wrote to the Vice Chancellor that such kind of marches should not be held on campus of an educational institution, prompting the university administration to order cancellation of the march as they "feared" that it might "disrupt" peace on campus.

But the organisers went ahead with the programme despite the cancellation of the permission and held a cultural programme, art and photo exhibition on the issue rather than a protest.

Agitated over the issue, ABVP members gathered outside VC office and shouted slogans demanding expulsion of the students.

JNU students' union joint secretary Saurabh Kumar, who is the only ABVP member in the union, said, "How can an event on Afzal Guru, who attacked the temple of democracy, be held here? We are demanding expulsion of those who organised it".

Your form could not be submitted.
This browser settings will not support to add bookmarks programmatically. Please press Ctrl+D or change settings to bookmark this page.
Topics : #controversy | #JNU | #Afzal Guru