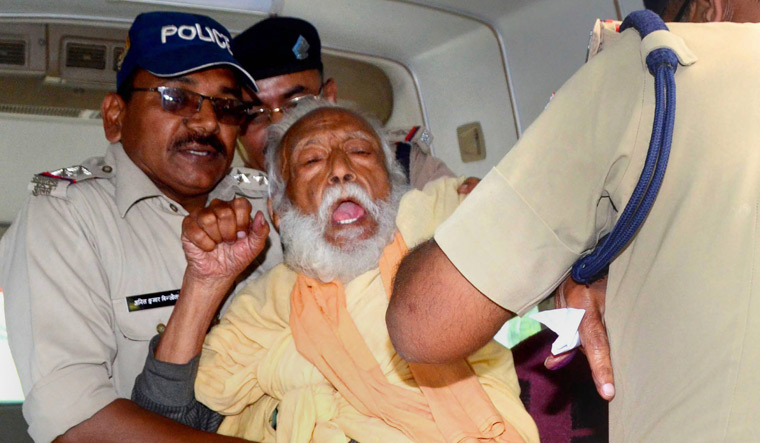 Ganga activist G.D. Agarwal being forcibly taken to hospital by police after his health deteriorated in Haridwar on Wednesday | PTI

Congress president Rahul Gandhi on Friday hailed environmental activist G.D. Agarwal alias Swami Gyan Swaroop Sanand for his contribution towards saving the Ganga and vowed to take his fight forward. Agarwal passed away at a hospital in Rishikesh, Uttarakhand, on Thursday, 111 days after he began a fast for a pollution-free Ganga. Agarwal, a former IIT professor, was 86.

In a tweet in Hindi, Gandhi described Agarwal as "the true son of mother Ganga", who gave away his life to save the river.

"Saving the Ganga is like saving the country. We will never forget him and will take his fight forward," Gandhi said on Twitter.

It is rivers like the Ganga that have made India, Gandhi noted.

Saddened by the demise of Shri GD Agarwal Ji. His passion towards learning, education, saving the environment, particularly Ganga cleaning will always be remembered. My condolences.

Agarwal, who began his hunger strike on June 22 demanding government measures to save the Ganga, died of a heart attack at the All India Institute of Medical Sciences in Rishikesh. Agarwal was admitted to hospital on Wednesday after he even gave up water.