Protests led to cancellation of early shows in Bhopal, Indore; police on alert 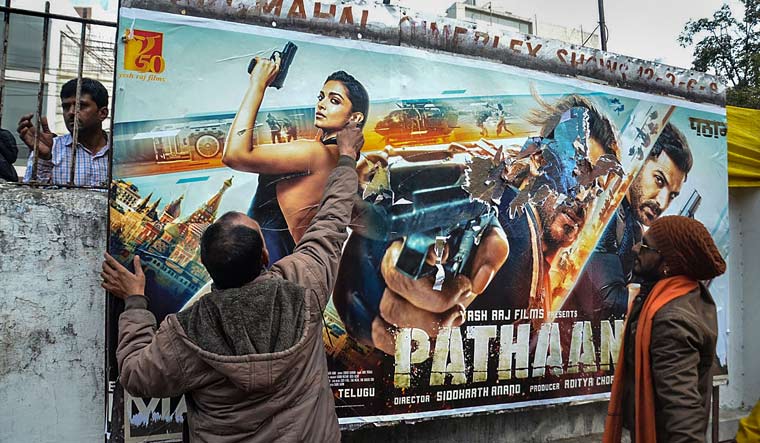 Members of Hindu Jagran Manch tear posters of the newly-released movie 'Pathaan' during a protest, in Bhopal | PTI

Protests by right wing organisations were reported from different parts of Madhya Pradesh on Wednesday leading to cancellation of some initial shows of Shahrukh Khan-starrer Pathaan.

During one such protest in Indore before the Kastur Cinema Hall, Bajrang Dal members allegedly raised objectionable slogans against Prophet Mohammad, causing members of Muslim community to gather at the Chandan Nagar and Chhatripura police stations, demanding action against the culprits.

An FIR under section 505 (statements conducing to public mischief) of the Indian Penal Code was registered at the Chandanpura police station upon complaint of Mufti Syed Sabir Ali against unknown persons later in the day. The complaint by Ali named an office bearer of the Bajrang Dal as leading the protest where the objectionable slogans were raised.

Indore police commissioner Harinarayanchari Mishra told media persons that adequate security arrangements have been made in the city and due legal action will be initiated against all those involved in breaking law and order. He confirmed action in the matter of objectionable slogans.

Earlier in the day, first shows had to be cancelled in one cinema hall each in Bhopal and Indore as right wing organizations protested in front of them, urging stopping of screening of the movie that caused controversy right since its first song ‘Besharam Song’ was released in December 2022.

In Indore, the activists of the Hindu Jagran Manch waved saffron flags at Sapna-Sangeeta cinema hall and recited Hanuman Chalisa. Some of them were reportedly carrying sticks. Also a section of protesters entered the theatre and forced the audience to move out, saying that they will not allow the screening. The shows, however, resumed later.

In Bhopal, protests were reported in front of Rangmahal Cinema Hall and film posters were torn forcing cancellation of the first show of the movie. Later in the day, the screenings continued smoothly.

In Gwaliore, Bajrang Dal activists staged a protest and road blockade outside a multiplex located in Deendayal Mall. The screenings, however, continued here.

Interestingly, Madhya Pradesh home minister Narottam Mishra, who was among the most vocal against the representations in the song and warned banning of the movie in the state if the objectionable contents were not removed, said on Wednesday that there was no point in the protests against the movie anymore as the said contents had been censored. He said that ‘the protesters will be convinced’ not to protest. Adequate security has been provided for screening of the film across the state, he further said.

Congress media cell vice-president Abbas Hafeez said that the protests were the result of prior instigation by the BJP leaders and called for full security for screening of the movie. He said that such protests, despite PM Narendra Modi’s warning against unrestrained statements against Bollywood movies, maligns the image of the state and it is a failure of the BJP government to maintain law and order situation. He said that even if the protesters are aligned to the ideology of the ruling party, the government should take stern action against them.