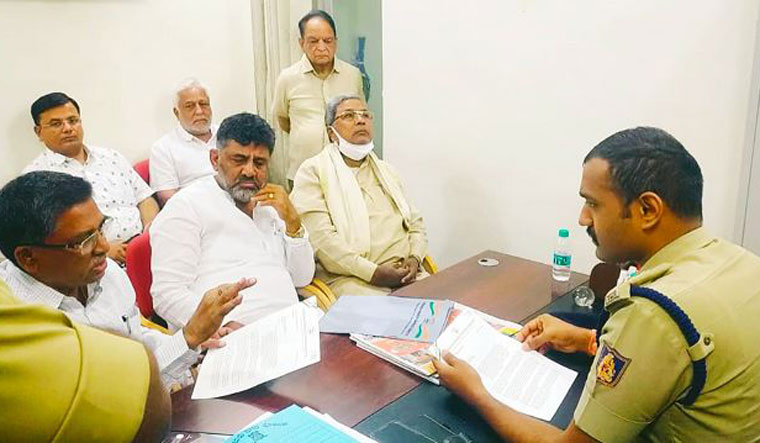 KPCC chief D.K. Shivakumar and CLP leader Siddaramaiah in a complaint filed at the High Grounds police station in Bengaluru, cited a viral video purportedly of Ramesh Jarkiholi in a Belagavi rally (on January 22, 2023) announcing that the BJP would pay Rs 6,000 to each voter in the elections.

"The offer of bribe is part of a concerted conspiracy hatched at the highest levels in the BJP with the tacit approval of the Chief Minister, the BJP chiefs at the state and national level. This is a blatant and brazen attempt to hijack democracy and are obvious criminal offences under sections 171B, read with 107, 120B, and 506 of the Indian Penal Code 1860. It is also a bribe offering to the voters as per the provisions of section 123(1) of the Representation of Peoples Act, 1951," stated the complaint.

The Congress leaders also charged that the design to bribe the voters would cost around Rs 30,000 crore considering there are five crore voters in the state and that proved the BJP leaders had "ill-gotten" money.

"This is a fit and appropriate case for the Income Tax Department and the Enforcement Directorate to initiate proceedings against the BJP’s central and state leaders, the CM of Karnataka and his Cabinet colleagues. It is alarming to see such blatant defiance of the law and open criminality by those occupying the citadels of power," said the Congress urging the police to investigate the case in accordance with the law