Administration had denied permission for screening the documentary 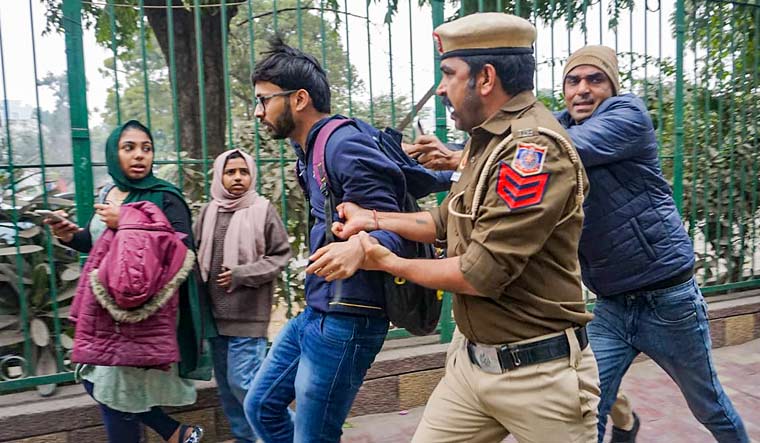 Delhi Police personnel detain a student during a protest over the screening of the BBC documentary on Prime Minister Narendra Modi, at the Jamia Millia Islamia campus | PTI

"University administration informed the police that some students were creating ruckus on the streets and therefore a total of 13 students were detained around 4 pm to ensure peace in the area," a police officer told ANI.

The administration had issued a statement reiterating that strict action would be taken against the organisers if the film was screened on the campus. It said some students belonging to the Students' Federation of India (SFI) had circulated a poster about the screening of the documentary.

“The university administration has earlier issued a memorandum/circular and once again reiterates that no meeting/gathering of students or screening of any film shall be allowed in the campus without the permission of the competent authority, failing which strict disciplinary action shall be taken against the organisers," the statement said.

Jamia Vice Chancellor Najma Akhtar also said some students were trying to disrupt the atmosphere of the campus by trying to organise such events.

There was heavy police deployment outside the campus throughout the day. The university, however, denied that they sought police intervention in the matter.

“We did not call the police. They were doing their work outside the campus. No screening took place, nothing happened inside the campus,” Chief Proctor Atiqur Rahman told PTI.

The Union government had last week directed social media platforms Twitter and YouTube to block links to the documentary "India: The Modi Question". The Ministry of External Affairs has trashed the documentary as a "propaganda piece" that lacks objectivity and reflects a colonial mindset.

The two-part documentary claims it investigated certain aspects relating to the 2002 Gujarat riots when Prime Minister Narendra Modi was the chief minister of the state.