Matondkar had resigned from the Congress in September 2019 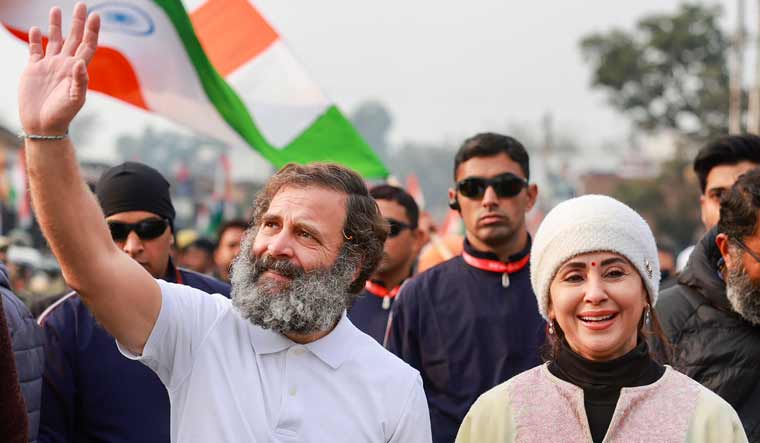 Matondkar, a popular Bollywood stars of the 1990s, joined Gandhi shortly after the march started from near the army garrison around 8 am amid tight security, with Congress workers and supporters lined up on the road along the route to welcome them.

Matondkar (48) had resigned from the Congress in September 2019 after a short association of six months, and joined the Shiv Sena in 2020. Dressed in a cream-coloured traditional Kashmir Pheran (loose gown) and beanie cap, Matondkar was interacting with Gandhi as they marched along.

The yatra, which started from Kanyakumari on September 7, entered Jammu and Kashmir from Punjab on Thursday and reached Jammu city on Monday. The march is scheduled to make two night halts at Ramban and Banihal along the Jammu-Srinagar National Highway before its culmination in Srinagar with a grand rally at the Sher-e-Kashmir Cricket Stadium on January 30.

A 65-member strong Ladakh delegation led by Ladakh Territorial Congress President Nawang Rigzin Jora joined Gandhi at the start of the yatra and briefed him about the issues and concerns of their people, one of the delegation members said.

A group of Kashmiri Pandit migrant women, wearing their traditional attire and carrying flower petals, were waiting outside the famous Kol-Kandoli temple to welcome Gandhi.

"We are wandering in Jammu for the last three decades after our migration from Kashmir. We have come here to welcome Gandhi as he could help in our rehabilitation back in the Valley as it was Congress which worked for the community in the past by providing employment package to our youth," Geeta Koul said.

She said the biggest issue for them is the rehabilitation of the community and the BJP has miserably "failed" in this mission and "ignored us". After walking for over one-and-a-half hours, the yatra is scheduled to make a stopover and will resume near the Army gate Rehambal in Udhampur district at 2 pm.