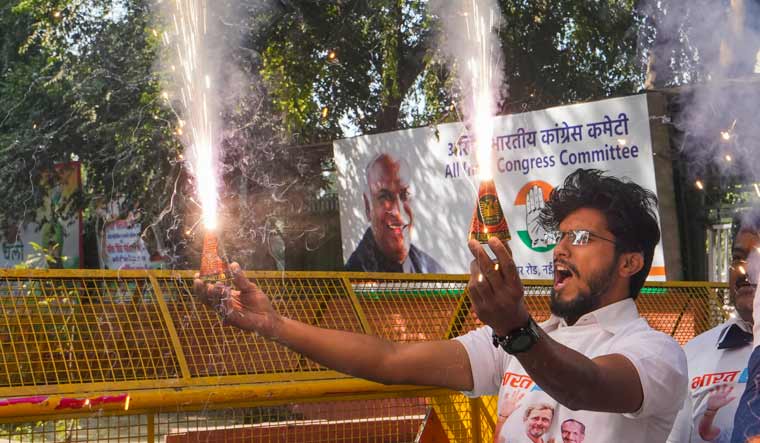 The Congress has convened a meeting of all its newly-elected MLAs in Himachal Pradesh in Shimla on Friday and the meet is likely to pass a resolution authorising the Congress president to elect the CLP leader.

Earlier, the party had called all its MLAs to Chandigarh but changed its plans later after the party got a clear majority in the assembly elections on Thursday.

AICC in-charge of Himachal Pradesh Rajeev Shukla said the Congress was happy that it is getting an opportunity to form the government in the state and asserted that the party will do everything to fulfil the 10 guarantees made to the people of the state and would provide better governance to people.

He had earlier said that the party had called all its MLAs to Chandigarh but later changed the decision.

Sources said the MLAs are likely to pass a one-line resolution authorising Congress president Mallikarjun Kharge to decide the CLP leader. This has been the tradition in the Congress party, they said.

"The party is sending two observers -- Chhattisgarh Chief Minister Bhupesh Baghel and senior leader Bhupinder Hooda-- along with me. We will be travelling to Shimla tomorrow where all the party MLAs have been called," Shukla said.

Earlier, Shukla had said that he along with Baghel and Hooda will travel to Himachal Pradesh.

Shukla said Priyanka Gandhi took the reins of the campaign in her hands and did a great job with it.

He said Rahul Gandhi's Bharat Jodo Yatra had also had an indirect impact on the elections and among the people.

While Shukla is AICC in-charge of Himachal Pradesh, Baghel was appointed senior observer for the polls.