Change in 'Raj' or 'Riwaaj'? Himachal Pradesh to pass verdict 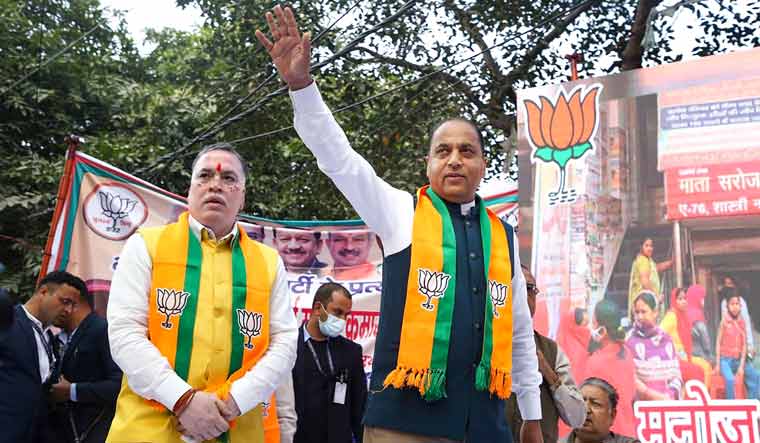 Himachal Pradesh is set to reveal on Thursday if its voters have bucked the anti-incumbency trend and re-elected the ruling party - something that has not happened after 1985.

Going by Himachal Pradesh's "riwaaj", or tradition, it should be the Congress's turn to form the next government.

But, with all but two exit polls predicting an edge for the ruling Bharatiya Janata Party, pollsters are keenly watching which way the voters have decided in the closely fought contest.

Himachal Pradesh has not returned any incumbent government to power after 1985, a trend the ruling BJP, powered by Prime Minister Narendra Modi's personalised campaign, hopes to break.

The BJP slogan this time was "Raj nahin, riwaaj badlega", meaning the convention will change, not the government.

Of 55 lakh voters in the state, over 75 per cent exercised their franchise in the November 12 election to elect its 68-member assembly and government. A total of 412 candidates are in the fray in this election.

In the 2017 assembly elections, the BJP had won 44 seats and the Congress 21, with one seat going to CPI-M, and two to independent candidates.

Meanwhile, the Congress has been confident of its victory, saying the voters will decide on the fundamental issues of price rise, joblessness, the old pension scheme, and other challenges of life and livelihood the state residents have been facing.

With a muted campaign by the Aam Aadmi Party and its former state in-charge Satyendar Jain lodged in Tihar jail, the Congress is upbeat that its vote share will only improve, while the BJP hopes to gain from a higher women vote percentage than men.

The BJP's campaign in Himachal saw exclusive focus on women and youth, with the party rolling out a standalone manifesto for women for the first time in the state's history.

A higher women turnout has of late favoured the BJP, as seen in Uttar Pradesh and Uttarakhand, with the party hoping that similar trends will hold in Himachal Pradesh.

Women voter turnout in Himachal has surpassed men's since 1998.

In addition, a historic voter registration in the hill state in the 18-19 year segment has given the BJP a reason to believe it may have an edge.

The stakes are highest for the Congress which has been on a losing spree for over two years now, not registering a single state election victory on its own.

The party holds power only in Rajasthan and Chhattisgarh, both of which will go to polls in 2023. Congress insiders say that any hopes for the party's revival has to start from Himachal Pradesh.

"If we don't win Himachal, I don't know from where we will win," said a Congress leader.

Both BJP and Congress camps are learnt to have been in touch with independent candidates who might play a key role in the event of a close contest, predicted in several exit polls, with a slender edge to the BJP.

The BJP has bucked the trend in Uttar Pradesh, Goa, Assam, and Uttarakhand by repeating its state governments there, and is hoping to repeat its government in Himachal Pradesh, which is also the home state of BJP national president J P Nadda.

It is hoping for an encore on the back of its development agenda, while the opposition Congress is expecting voters to go by the four-decade old tradition of voting out the sitting government in the state.