Winter session of the UP legislature kicked off on Monday 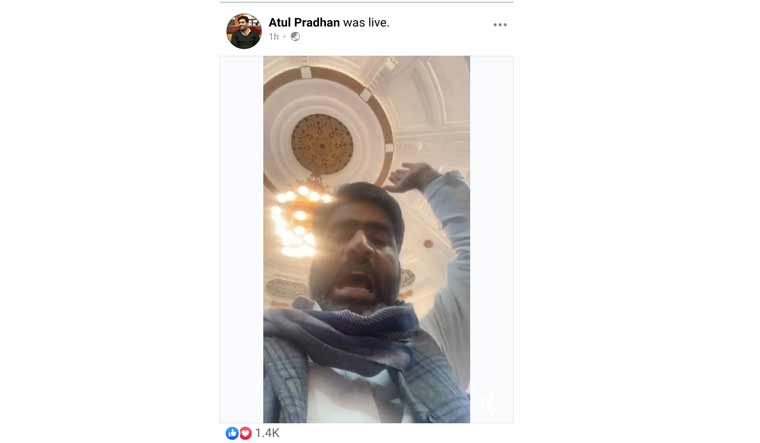 A Samajwadi Party (SP) MLA who went live on social media to show off his sloganeering was promptly punished by the Vidhan Sabha speaker in Uttar Pradesh on Tuesday.

This morning, Atul Pradhan, SP MLA from Sardhana (Meerut) went live from his Facebook account. In the 2.22 minute-long video, shot inside the Vidhan Sabha, Pradhan can be seen and heard shouting ‘Inquilab Zindabad’. The angle of the shot suggests he is holding his phone in the right hand at waist level.

At the time of the filing of this report, the video had been viewed by more than 1,400 people. Pradhan’s supporters had left messages such as: ‘Sangharh ka doosra naam Bhaiya Atul Pradhan’ (Atul Pradhan’s name is a synonym for struggle) and ‘Good job’.

The Vidhan Sabha speaker, Satish Mahana, was however left unimpressed.

At 11.40 am, the Speaker said, “Those respected members who have done Facebook live…investigation has revealed that..Atul Pradhan has done a Facebook live which is against the rules of the Vidhan Sabha..I direct that if Shri Atul Pradhan is in the Vidhan Sabha he should leave”. After announcing this, Mahana sat down and then spoke into his mike again, “…for the entire session”.

The winter session of the UP legislature kicked off on Monday. Later, amid sloganeering by SP members, Mahana, again picked on the issue.

He announced, “It has come to my notice that the proceedings Vidhan Sabha are being streamed live by respected members..this is not permitted under the rules…if it comes to my notice that any member has done so I shall decide that he not be permitted in the House…l will not compromise with the dignity of the House…whatever you want to say and for however long, I shall listen to it.”

At the interjection of other MLAs that Pradhan be forgiven as this is his first term and thus he is not conversant with the rules, his banishment from the House was reduced to an hour.