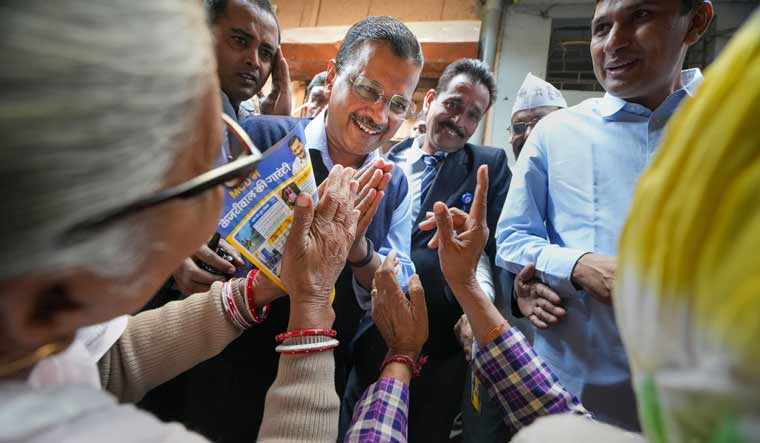 As it endeavours to make its dominance of politics in the national capital complete with a victory in the municipal elections, the Aam Aadmi Party (AAP) is banking on the amenities provided to the people by the NCT government, primarily its populist schemes, and the charm offensive of Chief Minister Arvind Kejriwal.

The chief minister has hit the streets of Delhi, holding roadshows and engaging in a door-to-door campaign for the December 4 election to the Municipal Corporation of Delhi. It is a high-stakes battle for the AAP as it aims to unseat the BJP that has ruled the civic body for the last 15 years, and the party is banking on the image of Kejriwal as the leader who has provided the denizens with free electricity and water and will live up to the promises made in the municipal elections too.

In the midst of a shrill and extraordinarily high-profile campaign for the local elections, Kejriwal has chosen to campaign at the grassroot level, having tea with denizens at a 'dhaba' or engaging with groups of people in residential colonies. Both the BJP and the AAP have deployed their senior leaders to campaign for the civic polls, and the AAP hopes that Kejriwal's record of having delivered on promises as chief minister will work in favour of the party in the local elections too.

In an interaction with a group of denizens in a lower middle-class locality in south Delhi on Tuesday afternoon, the chief minister, playing up his self-professed identity as a 'son' and of Delhiites, asked a group of senior citizens if they have availed of the Delhi government's scheme of providing them with free pilgrimage. As some of them said yes and mentioned the places they had visited as part of the scheme, Kejriwal told them that next time, he will ensure that they visit Ayodhya.

An important aspect of his conversations with the people is asking them if they are getting 'zero' electricity bills, and if the water supply in their area has improved. The idea is to emphasise upon the AAP regime having fulfilled its promises.

The most important issue in the MCD elections is the problem of inefficient disposal of garbage and the landfills in the city brimming over with waste. Kejriwal, in his interactions, is seeking the vote of the people as a chance to clean up the city and find a solution to the garbage issue.

In a fiercely fought electoral battle, the AAP hopes the popularity of Kejriwal will work to its advantage.