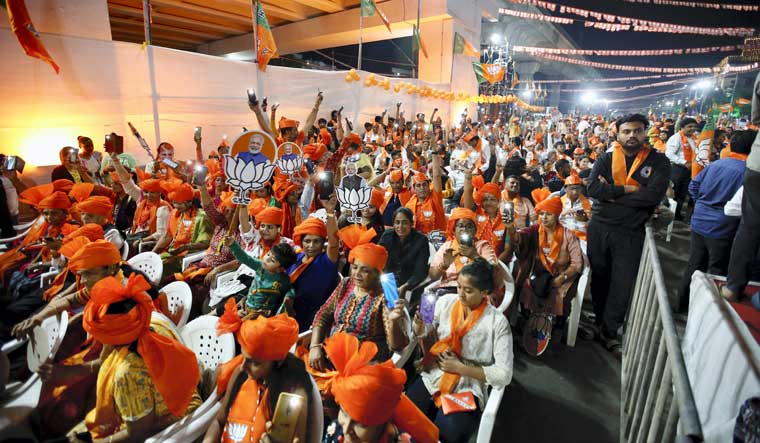 With a day left for the first phase of Assembly elections in Gujarat, the ruling BJP has embarked on intense electioneering in the state, roping in 11 top leaders, including Amit Shah and JP Naddha, to ensure a victory.

According to BJP sources, UP chief Minister Yogi Adithyanath and senior leader Smrithi Irani will also address rallies and hold road shows on Nov 29 in Gujarat.

Meanwhile, AAP convenor Arvind Kejriwal, who has camped in Gujarat for the last few days, visited Surat on Monday to meet with diamond businessmen and jewellers. Hoping to make an impact in Surat, a BJP bastion, Kejriwal batted for Bharat Ratna the diamond traders "for their contribution to the country's economy."

Congress leader Mallikarjun Kharge too is in Gujarat and on Monday, he lashed out against Prime Minister Narendra Modi's statement that the Congress of playing vote bank politics over terrorism. The new Congress chief said his party had sacrificed two prime ministers in the fight against terrorism and questioned whether any leader of the Bharatiya Janata Party (BJP) had fought for the freedom of the country.

Kharge was accompanied by Rajasthan chief minister Ashok  Gehlot in a poll rally in Mehsana and Ahmedabad city.

However, there are speculations that the party is opting for a silent campaign in Gujarat despite the ruling BJP's star-studded campaign garnering eyeballs.

Lalit Vasoya, Congress MLA from Dhoraji, said the party had confidence in its voters and is hoping people's "anger" with the state government will help it make a comeback.

Star campaigners are a "waste" of time and the mainstream media is often "pro-BJP", Vasoya said, adding that he has instead relied on visiting nearly all the 80 villages and three municipalities of his constituency besides using social media to reach out to his voters.