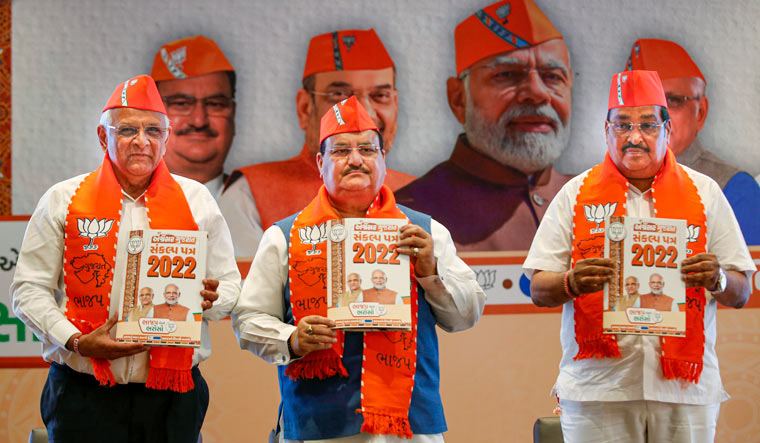 BJP president J.P Nadda on Saturday released the party's election manifesto for Gujarat in Gandhinagar. Ahead of the elections, the ruling party promised to start an 'anti-radicalism cell' against anti-national elements and to implement the Uniform Civil Code (UCC).

Chief Minister Bhupendra Patel and state party president C.R Paatil were also present during the event. According to reports, over 40 promises including jobs for youth and free healthcare are made in the manifesto.

"We will ensure the complete implementation of the Gujarat Uniform Civil Code Committee's recommendation and create more than one lakh government jobs for women in the next five years," said Nadda while releasing the manifesto.

Among the other promises include free and quality education to all female students from Kindergarten to Post Graduation. Also, free bus travels to women senior citizens and promised to provide one lakh government jobs to women for the next five years.

BJP also promised advanced healthcare facilities and mobile delivery of ration across all the 56 tribal taluks in the state. Residential schooling for tribal students, an upgrade of infrastructure in the healthcare and educational sectors are also promised.

BJP also promised to complete the works of Gandhinagar and Surat Metro, in order to kick start the first metro rail service at Saurashtra (Rajkot)  and Central Gujarat (Vadodara).