Farooq Abdullah to contest in next assembly polls in J&K 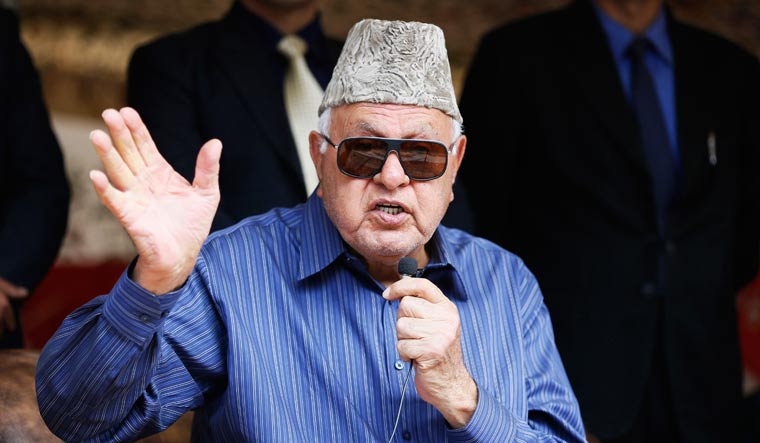 Having already announced his decision to step down as president of National Conference, former Jammu and Kashmir Chief Minister Farooq Abdullah, on Saturday, said he will be contesting the next assembly elections.

Abdullah, who on Friday had announced he will be relinquishing the presidency of NC next month, said he is not escaping the responsibility and will continue to work to strengthen the party.

"Insha Allah, I am going to fight the next assembly elections whenever held (in J&K)," Abdullah told reporters on the sidelines of a function organised to welcome new entrants into the party.

He said the NC is ready for the assembly elections and will emerge as a victor to pull out J&K from its troubles. "Let them announce the dates, we will show them where they stand," he said, apparently referring to the BJP which has claimed it will win 50-plus seats in the next assembly elections.

Abdullah said the time has come for the youth to take the lead in the party. "Whatever was possible from me, I have done that. I am not escaping as I am a party man and will remain so. I will continue to work for the success of the party."

Welcoming the new entrants into the party fold, he said their joining will further strengthen the party at the grass-roots level.

"We will together strengthen the National Conference and will address all the issues of Jammu and Kashmir," he said.

Referring to 1996, when the National Conference formed the state government under his leadership, he said the party worked hard to bring J&K back on the track at a time when everything was finished and only his party was on the ground.

"What the National Conference has done is history. When we came back to power in 1996, gun and bombs attacks were taking place everywhere...schools were closed and there were no roads and bridges.

"We restored order, reopened closed schools by deploying 'Rahbar-e-Taleem' teachers, posted 300 doctors in far flung areas and also restored the damaged infrastructure to bring J&K back on track," he said, adding that parties which were nowhere then were trying to claim credit today.

He urged the people to join hands with the National Conference to pull out Jammu and Kashmir and ensure that it marches alongside the rest of the country.