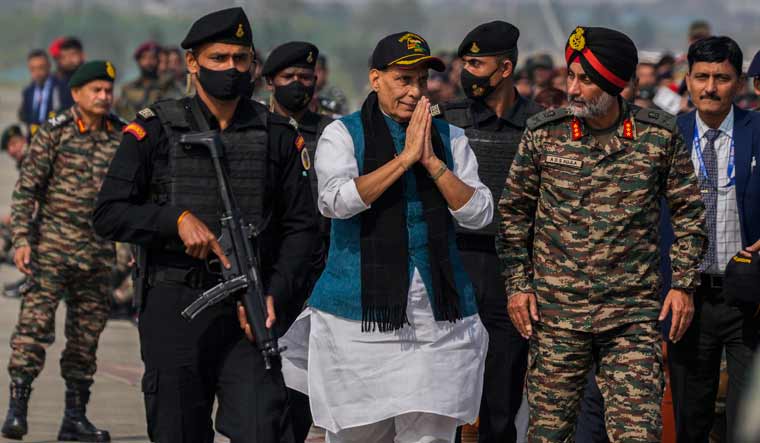 Maintaining its policy of strategic autonomy and carving out a distinct strategic path, defence minister Rajnath Singh’s recent assertion on Gilgit-Baltistan is a reiteration of the fact that it draws a line between refusing to categorically condemn Russian action in Ukraine while hardening its attitude against a belligerent China.

Speaking in Srinagar on Wednesday at an event to mark the 1947 anniversary of Shaurya Diwas, Singh had said that India’s development journey in Jammu and Kashmir and Ladakh will be completed only when it is extended to Gilgit and Baltistan. “The day isn’t far away when this mandate will also get fulfilled,” he said.

The latest salvo from the defence minister is also a reflection of the fact that its Russia policy is different from its China policy despite the fact that Russia and China have developed closer relations in the backdrop of the ongoing conflict in Ukraine that is based on countering the US and its NATO allies.

India’s Russia position came in for effusive praise on Thursday when President Vladimir Putin, speaking at a Moscow-based think-tank event said: “PM Modi is one of those people in the world who is able to pursue an independent policy in the interest of his country, and his people despite attempts to stop him…The future belongs to India.”

India has consistently abstained from voting on UN resolutions condemning Russia on the Ukraine ‘action’ although PM Modi had told Putin last month at the SCO Summit at Samarkhand that “today’s era is not an era of war”.

India had traditionally and historically cherished close relations with Russia and is significantly dependent on the latter for its military equipment including strategic platforms.

On the other hand, India’s blow-hot-blow-cold relationship with China plummeted ever since a border row that began in May 2020 escalated into a massive deployment of forces on either side of the LAC.

It is from the Gilgit-Baltistan region on the northern extreme of Pakistan-Occupied Kashmir (PoK) from where the China-Pakistan Economic Corridor (CPEC) begins its run.

The 3,000-km-long CPEC is among the flagship projects of the ambitious Belt and Road Initiative (BRI)—President Xi Jinping’s pet project that kick-started when he came to power in 2013. BRI seeks to build a network of roads and sea routes linking Southeast Asia, Central Asia, West Asia, Africa and Europe.

China has already spent a substantial part of the committed $60 billion in the CPEC project in Pakistan. In turn, Pakistan is believed to have deployed about 25,000 soldiers to guard and protect the CPEC including the 34 and 44 Light Infantry Divisions which are called Special Services Division North (SSDN) and Special Services Division North (SSDS).

The defence minister also laid claim over PoK and pointed out that there is a human rights situation in PoK. “The pain of the people of PoK also troubles us and not just them. I want to ask Pakistan, what rights have been given to people who live in the regions that are under its forcible occupation?”

The Indian position supports the parliamentary resolution of 1994 that demanded Pakistani vacation of its illegally occupied territories in the region.

The stand received renewed traction when home minister Amit Shah, defence minister Rajnath Singh, and foreign minister S Jaishankar, spoke out on the issue in tandem after August 5, 2019—the day Article 370 was abrogated in Jammu and Kashmir.