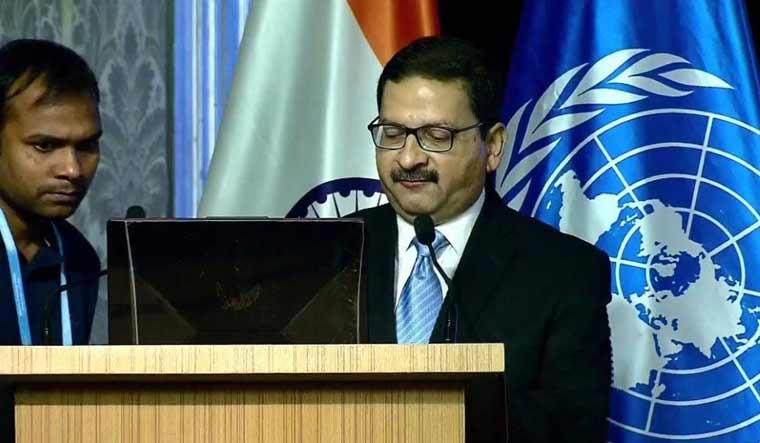 India told the United Nations Security Council on Friday that “state-sponsored terrorism” is the biggest threat, and the Balakot airstrike in Pakistan was in response to the Pulwama terror attack in 2019, a statement that gains huge significance as India hosts United Nations Security Council’s counter-terrorism committee meet for the first time to discuss future challenges and threats.

Without naming Pakistan, New Delhi minced no words before the global community gathered in Mumbai in blaming ''state-sponsored terrorism'' for terror activities on its soil, especially in three fronts—Kashmir militancy, Islamic terror, and pro-Khalistan extremism. This is the first time India is hosting the UNSC counter-terror committee meeting, in Mumbai and New Delhi.

The opening session in Mumbai had the UNSC counter-terror committee representatives from the US, the UK, China, Russia, among others rapt in attention as India listed out its threats, concerns, and actions taken to counter the menace of terrorism.

Terrorism has plagued the world, but India understands the cost, said Foreign Minister S. Jaishankar. The soft opening session—a tribute to the victims of terror who shared their horrific experiences of the 26/11 Mumbai terror attacks—was followed by hard facts.

What stood out was the elaborate presentation made by Shafi Rizvi, special director in the Intelligence Bureau, on the predominant challenge of countering terror financing in India and the South Asian region. He did not mention Pakistan but said a ''troublesome jurisdiction'' had been placed on the grey list of Financial Action Task Force (FATF) in 2018 till mid-2022.

Notably , Pakistan has been removed from the grey list in the just concluded FATF meet, a development New Delhi isn’t happy about given the continued attempts to fuel unrest and terror in the country, especially in border states of Jammu and Kashmir and Punjab.

Rizvi appreciated the role of the FATF over the years in assisting the UN in countering the terror menace. The UN designation of Jaish-e-Mohammed and LeT as terror organisations and nine individuals as terrorists has made an impact, said Rizvi.

He said in addition to this, there were four impacts of the FATF action—nine terrorists were arrested, tried and convicted, open terrorist activity like raising funds on social media slowed down, and open public meetings by Hafiz Saeed was forced to stop.

India did not stop here, but raised the issue of Masood Azhar before the global community, saying the JeM chief was a known accomplice of Osama Bin Laden, responsible for a series of terror acts. China had blocked India’s proposal to blacklist the JeM chief, but New Delhi clearly isn’t backing down and elaborately described his terror activities to the audience at the UNSC.

India also told the global meet that hard targets like security forces camps have been selected by these terror outfits using suicide bombers, and sophisticated weapons, to carry out five attacks in Jammu and Kashmir in 2014 that moved up to eight in 2015, 15 in 2016, came down to eight in 2017 and three in 2018. The mention of the 2019 Pulwama attacks was significant as India said it responded with the Balakot airstrikes.

''Most of them have been resolved. But the reason why we are discussing the security matrix is that security officials have had to build different paradigms and analytical structures to be able to deal with this kind of terror,'' said Rizvi.

''Despite efforts over last two decades, use of cash and hawala continue to remain the predominant challenge as they continue to act as the primary channel through with terrorists get funds,'' he said. It is possible that the stringent checks brought in to scrutinse opening of bank accounts, use of e-wallets among others are continuing to push terrorists to use cash and hawala channels, he added.

''Drones have become a huge concern in the last one or one and a half year and the source is cross border and the destination is border states of Kashmir and Punjab,'' said Rizvi. ''We see great risk coming in these areas from drones.''