Party chief Chandrasekhar Rao to make the announcement on Wednesday 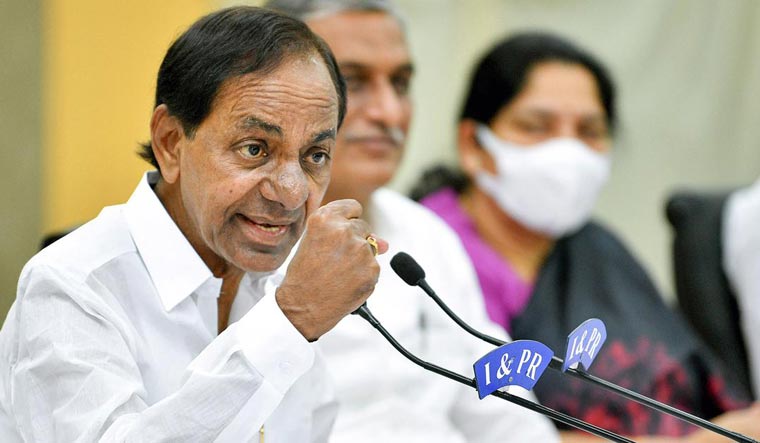 The Telangana Rashtra Samiti (TRS) is likely to be renamed as 'Bharata Rashtra Samiti' (BRS) and the state government's welfare schemes would be showcased across the country to help it emerge as a national force, ruling party sources said on Tuesday.

TRS president and Telangana Chief Minister K Chandrasekhar Rao is expected to announce the new name for the party on Wednesday, considered auspicious in view of Vijayadasami. The rechristening exercise and the plan to reach out to people by pitching its "Telangana good governance model" is part of party's efforts to foray into national politics and effectively take on the BJP.

The TRS general body meet, scheduled to be held on Wednesday at 'Telangana Bhavan', the party headquarters here, would pass a resolution effecting the name change, sources said.

The Election Commission would be apprised of the change as per the Representation of the People Act and relevant rules.

In its outreach initiative, the party would focus on welfare schemes being implemented in Telangana like 'Rythu Bandhu' support scheme for farmers and 'Dalit Bandhu' (Rs 10 lakh grant to every Dalit household to start any business or trade).

Similar schemes are not devised and implemented at the national level and the BJP has also dubbed welfare initiatives as "freebies." Electricity has not been provided in all the villages, across the country and all such aspects would be taken up in the campaign to expose the ruling party at the Centre, they said.

The name change would be conveyed to the Election Commission through e-mail and later in person on October 6, sources said.

In September, the party had said that "very soon, the formation of a national party and formulation of its (national party) policies will take place". Recently, Rao, also known as KCR, had announced that free power would be supplied to farmers across the country, if a "non-BJP government" was voted to power in the 2024 Lok Sabha elections.

Rao, during his recent meeting with his Bihar counterpart Nitish Kumar, called for a "BJP mukt Bharat" (BJP-free India) blaming the national party's government at the Centre for the "many ills plaguing the country."

The TRS, in its foundation day event in April this year, had resolved that the party should play a key role in national politics in the interest of the country as the BJP is "exploiting communal sentiments," for its political convenience.