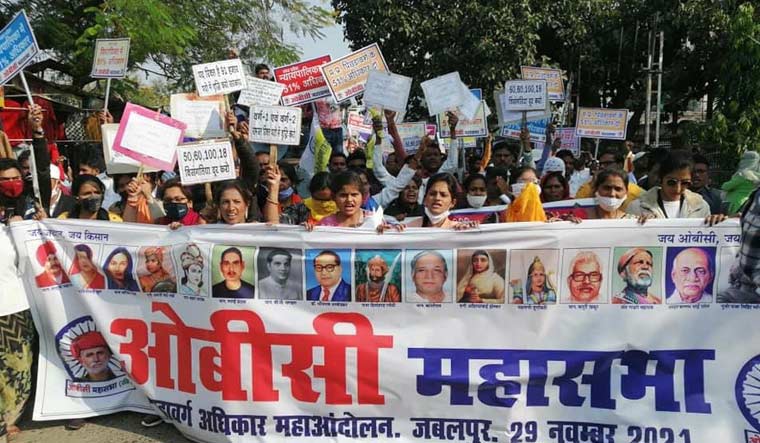 A protest staged by OBC Mahasabha

Resentment among Other Backward Classes (OBCs) community members and organisations began to boil again with the Madhya Pradesh government deciding to restart held-up recruitment through MP Public Services Commission (MPPSC) with 14 per cent quota for OBCs.

Community members, activists and office bearers of various organisations representing OBC, SC and ST communities poured out protests on social media platforms, with a hashtag #OBC_Kans_Shivraj. Chief Minister Shivraj Singh Chouhan was targeted for reducing the OBC quota in recruitment despite hailing from the OBC community.

The issue arose after the state general administration department (GAD), on Thursday, wrote to the MPPSC to go ahead with the declaration of pending recruitment exams results, including that of the state services exams (SSE) of 2019.

The results of various recruitment exams of MPPSC have been held for the past three years due to petitions against and for enhanced OBC quota of 27 per cent that are pending at MP High Court. The HC had issued an interim stay on the 27 pc OBC quota in March 2019 right after the Kamal Nath-led Congress government hiked the quota for government recruitment from existing 14 per cent.

In a letter on September 29, the GAD said in view of the interim orders of the MP High Court, the MPPSC could come out with pending results of various recruitment exams in two parts. One part will be regular results for 87 per cent posts, while the second part will be a provisional result for 13 per cent posts. In this provisional list, 13 per cent each of OBC and unreserved candidates would be placed.

The letter further said these candidates selected in the second part would be provisional candidates in next phases of exams (mains and interviews) and their selection would be based on the final judgment of MP High Court.

Apart from protesting the reduction of their quota from 27 to 14 per cent, the OBC organisations are also taking objection to the EWS quota (meant for general category students) being retained.

The OBC Mahasabha – a conglomerate of OBC organisations – warned of a major agitation after October 3 on the issue. Mahendra Singh Lodhi of the forum tweeted to say the date and time for the agitation in the shape of jamming of highways should be drawn out by the OBC community members and candidates (of the recruitment exams). He said the Mahasabha was ready to hold an agitation with the participation of five lakh people.

MP state working president of the Mahasabha, Rakesh Singh Lodhi, tweeted to say the erstwhile Kamal Nath-led Congress government had increased the OBC quota to 27 per cent, but the Chouhan government reduced it again to 14 per cent, which amounts to cheating the OBC community. The BJP government should be changed, he said.

Activist Hansraj Meena said this reduction in the OBC quota amounted to cheating the community. “This violation of rights cannot be tolerated; boycott BJP,” he tweeted.

Author and journalist Dilip Mandal tweeted: “The 52 pc OBC will get 14 pc and 5 pc EWS will get 10 pc reservation in Madhya Pradesh. OBCs have got this with Shivraj Singh Chouhan as chief minister. Congress had increased the OBC quota to 27 pc and Chouhan has now reduced it to 14 pc. What kind of politics is this?”

All these tweets carried the hashtag against Chouhan.