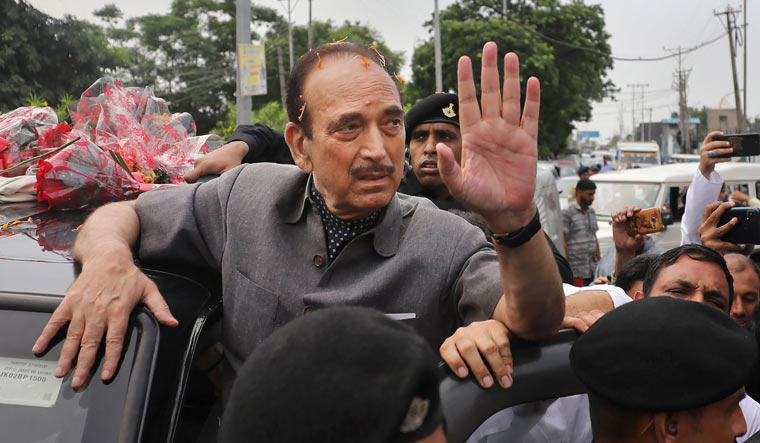 The veteran political leader also displayed the flag of the party in blue, while and mustard colours.

“From today Navratri begins and we also decided to launch our party on this auspicious occasion,’’ he said.

He said mustard signifies creativity and the birth of a new idea. He said it also represents diversity. “All of India is as diverse as J&K with different religions, geography and culture,’’ he said.

He said white relates to peace. “We believe in Gandhiji and therefore peace is our priority and ideal,’’ he said. “Blue signifies depth like that of an occasion and height of the sky,” he added.

He said the world Azad in the party name stands for free and independent thinking.

“The members of our party should be inspirational and join politics for serving the people and not for making a fortune,’’ he said.

Asked about the criticism he faced for his statement that Article 370 restoration was impossible, he said what he meant was Parliament can restore Article 370 only if those who demand its restoration have the numbers in the Parliament to do so.

“I am not saying it cannot be done, but for that one needs numbers or if those who demand its restoration can motivate Prime Minister Narendra Modi,’’ he said.

When asked about his time in Congress, he did not want to answer. He said he will make trips to Delhi but mostly he will be touring the state and meeting people.

He said the new party will have a mix of old and young. “Youth will be preferred and there will be no age bar in the distribution of tickets,’’ he said.” The next big priority for us is to get the party registered as the elections can be held anytime.”

He appealed to the government to reconsider ending the centuries-old practice of shifting the government to Jammu in winter as it has badly impacted the economy of the region. He said many industrial units in Kathua and Samba that used to supply goods mostly to Kashmir have been adversely impacted after the removal of Article 370.

“I would also like to appeal to the government that it should accord the same preference to the apple trucks stuck on the highway as is given to ambulances,'’ he said.

He said when he was the chief minister, his government ensured all-round development of the state. He said the government was transparent, free of corruption and also worked double shifts.

“ I spoke for four hours in assembly, and after a pause of two minutes, for another four hours in the legislative council which is a record,’’ he said. “He said those criticising him for Article 370 remarks should check the records of the Parliament as to who spoke in its favour.

He reiterated that land and jobs should be reserved for the people of Jammu and Kashmir.

“ Many people wrongly believe that these rights were given to them by Kashmiris, but the fact is that it was done by Maharaja Hari Singh who had great foresight,” he said.