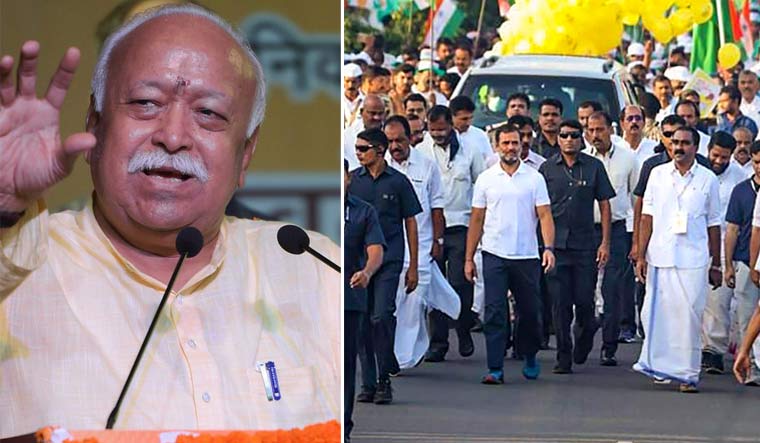 The Congress claimed on Thursday that RSS chief Mohan Bhagwat's meeting with the head of the All India Imam Organisation was due to the impact of the party's "Bharat Jodo Yatra" and requested Bhagwat to walk with Rahul Gandhi in uniting the country "with a tricolour in hand".

Taking forward his outreach to the Muslim community, Bhagwat visited a mosque and a madrassa here on Thursday and held discussions with the All India Imam Organisation chief, who termed him "rashtra pita".

The Rashtriya Swayamsevak Sangh (RSS) "sarsanghchalak" went to a mosque in central Delhi's Kasturba Gandhi Marg and followed it up with a visit to the Madarsa Tajweedul Quran in north Delhi's Azadpur. This was Bhagwat's first ever visit to a madrassa, an RSS official accompanying him said.

Reacting to it, Congress's media department head Pawan Khera said it has only been 15 days since the Bharat Jodo Yatra has started and a spokesperson of the ruling Bharatiya Janata Party (BJP) has said "Godse Murdabad", ministers have become concerned over the hatred spread through the media and Bhagwat has reached out to imams.

"Only 15 days have passed for the Bharat Jodo Yatra and the results are showing. A BJP spokesperson has said 'Godse Murdabad' on television. Mohan Bhagwat is going to the house of a member of another religion. Under whose impact is this happening? This is the impact of the Bharat Jodo Yatra," Vallabh said.

By the time the march is concluded, the hate and the divisions created by the government will disappear, he added.

"We request Bhagwatji that when a few days of the yatra have had such an impact on him, he should participate in the Bharat Jodo Yatra for an hour, walk with Rahul Gandhiji with a tricolour in hand, raise the slogan of 'Bharat mata ki jai' and unite India," the Congress leader said.

Asked about multi-agency teams, spearheaded by the National Investigation Agency (NIA), arresting 106 functionaries of radical Islamic outfit Popular Front of India (PFI) in near-simultaneous raids at 93 locations in 15 states on Thursday for allegedly supporting terror activities in the country, Vallabh said action should be taken against any individual or organisation indulging in anti-India activities.

"But the question is why did the (Narendra) Modi government not take steps to ban the PFI in the last eight years. Is this part of your divide-and-rule policy?" he asked.