PFI working along with Periyarists and Tamil nationalists, claims an officer 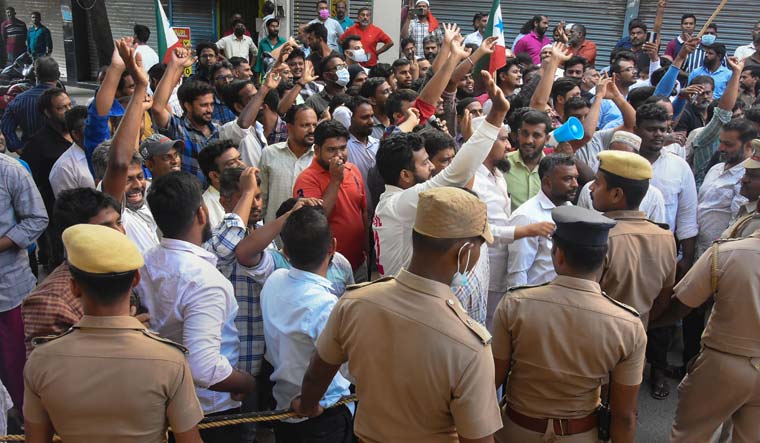 PFI workers protest in Chennai against the NIA raid | PTI

Sleuths of National Investigation Agency have arrested at least 12 functionaries of the Popular Front of India (PFI) on Thursday, as part of their nation-wide searches. The NIA officers who were camping in Coimbatore, Madurai, Tirunelveli, Chennai, Cuddalore and Ramanathapuram since Wednesday, sources say, swamped into the PFI premises in the wee hours of Thursday. The searches in most of the PFI offices in Tamil Nadu began around 3.30 am.

In Chennai, the searches were carried out at the PFI state headquarters at Purasawalkam and also at the residences of its office bearers. In Coimbatore, the NIA raided the house of A.S. Ismail, who is one of the national executive committee members of the PFI. Searches were conducted on the premises of PFI offices at Nelpettai in Madurai, Erwadi in Tirunelveli and Panpozhi in Tenkasi. Tension prevailed at various places and a heavy police force was deployed in Madurai, Coimbatore and Chennai during the searches.

At least 12  people, including PFI’s national executive committee members and state level office bearers have been arrested by the investigation agency following the raids. According to highly placed sources, the national executive committee members who were picked up from Coimbatore, Madurai, Tirunelveli, Cuddalore, Ramanathapuram and Chennai are being taken to Delhi for further interrogation, while the state level office bearers have been taken to Poonamallee court, near Chennai form further enquiry.

Sources also say that the NIA searches were carried out across India simultaneously at all the PFI offices, as there were particular information about PFI being funded by some pan-Islam groups. “They had massive plans to destabilise India,” says a senior officer in Tamil Nadu police department. The officer also claims that the PFI in Tamil Nadu was working along with many of the activist groups including Periyarists and Tamil nationalists.

Sources also say that PFI had a role in several mass protest movements organised in the state, including the ongoing protest against the setting up of the airport at Parandur near Chennai.

Meanwhile, M. Mohammed Sheikh Ansari, state president of PFI, in a statement condemned the raids and arrests and claimed that the ruling BJP was trying to suppress minority rights movements through the NIA. “NIA is being used by the BJP to target innocent members of our organisation which is working towards people's welfare. Popular Front is not an organisation which will bend on or compromise its principles in the apprehension of these coward tactics of the BJP,” Ansari said in the statement.

It may be recalled that Tamil Nadu Governor R.N. Ravi, during an event in Chennai, had called the PFI a “very dangerous organisation”. He had also said that the political parties were supporting it for their own vested interests. Ravi also said that PFI was in the forefront in sending fighters to Afghanistan, Iraq and Syria. “We need to be very, very careful about it,” he said.

The PFI had raised objections to Ravi’s comments.