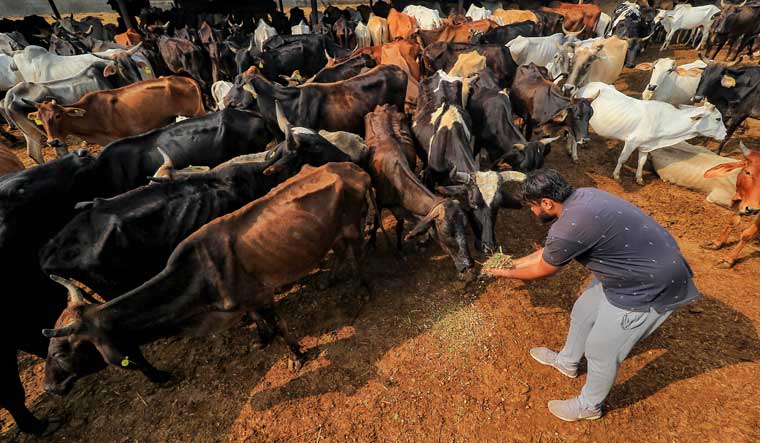 The outbreak started in Gujarat and Rajashthan around July and spread to several other states including Maharashtra, Madhya Pradesh, Delhi, and Jharkhand in the following months | PTI

Lumpy skin disease has spread to 26 (out of 52) districts in Madhya Pradesh and caused deaths of 101 cattle till now. Given the situation, Chief Minister Shivraj Singh Chouhan announced free vaccination for cattle and directed measures akin to Covid-19 pandemic to prevent further spread of the disease.

The chief minister’s direction came following a review meeting held in Bhopal on Wednesday. The CM also directed setting up of a state-level disease control room in Bhopal and toll-free number 1962 and phone number 0755-2767583 for cattle-rearers to report the disease and seek support.

The Congress, meanwhile, attacked the BJP government for delaying action to prevent spread of the disease, saying that it prioritized the ‘Cheetah event’ instead, pointing to the release event of Cheetahs in Kuno National Park by Prime Minister Narendra Modi. MP Congress chief Kamal Nath tweeted on the issue on Wednesday morning, ahead of the CM’s review meeting.

It was informed during the meeting that 7,686 cattle have been affected by the disease and 5,432 had recovered, a government release said. Though the release said that the disease had been confirmed in seven districts (Ratlam, Ujjain, Mandsaur, Neemuch, Betul, Indore and Khandwa), the CM’s office tweeted a video clip of Chouhan addressing the review meeting and asking officials to ensure maximum alertness as the virus had spread to 26 districts.

The chief minister said during the meeting that all communication media should be used in the best possible way for awareness of the disease and maximum vaccination should be ensured. He said that the lumpy virus skin disease was a communicable disease and it should not be treated casually. It is the duty of the government to eliminate it, Chouhan said, adding that Gram Sabhas (village level meeting) should be convened and cattle-rearers should be given information on preventive measures.

He said vaccination should be carried out in cow shelters and for other cattle, too. Movement of cattle should be prevented from villages where the disease has been reported.

“We have to take the lumpy virus very seriously. We have to fight this virus in a similar way we fought Coovid-19 virus, so save our cattle,” the CM said.

It was informed that the lumpy virus skin disease affects bovines including cows and buffalo progeny. Symptoms of the disease include mild fever in the infected animal, excessive salivation from the mouth and watery eyes and nose, swelling of the lymph nodes and legs, and decreased milk production, miscarriage in pregnant animals and sometimes death of the animal. There is formation of a large number of lumps of 2 to 5 cm in size on the animal’s skin and they can get mouth ulcers. The disease does not spread from animals to humans. Preventive and control measures include keeping infected cattle/herds separate from healthy animals, destroying the parasitic insects, mites, flies, mosquitoes, etc. that affect animals with insecticides and disinfectants, keeping the animals’ shelters clean, stopping the movement of animals from the infected areas to other areas, getting treatment from the veterinarians immediately after the symptoms of the disease appear, banning the markets and fairs of animals, buying and selling of animals etc till the disease is controlled in the area apart from vaccination of healthy animals.

In a series of tweets ahead of the review meeting, Kamal Nath said “the outbreak of lumpy virus (disease) is becoming worse in Madhya Pradesh day by day. Large number of cows are getting affected by the virus in various parts of the state and a large number are dying painfully. The government has not taken yet the necessary steps that should have been taken well in time. It remained engaged in the ‘Cheetah event’ during the past several days. Now if it has come out of the Cheetah event, it should take care of the cow-mothers.”

He further said, “the situation of cows is pathetic in the cow shelters, many are getting killed in road accidents, there is no fodder for them and there is huge mismanagement in the shelters. The way the scenario of deaths of thousands of cows is coming to the fore, it is the need of time to pay attention to the cows and arrangements in cow shelters, but the government is still fully engaged in the Cheetah event. I demand that the government take all necessary steps in this regard.”

Congress spokesperson Sangeeta Sharma tweeted a letter of Nath dated September 17 to state animal husbandry minister Prem Singh Patel, asking for filling up of the 2,675 vacant posts of assistant veterinary field officers, especially in the view of outbreak of lumpy skin disease among cattle. Sharma said that Nath had tried to wake up the government to the situation, but it did not wake.