No encroacher will be spared, says Karnataka revenue minister 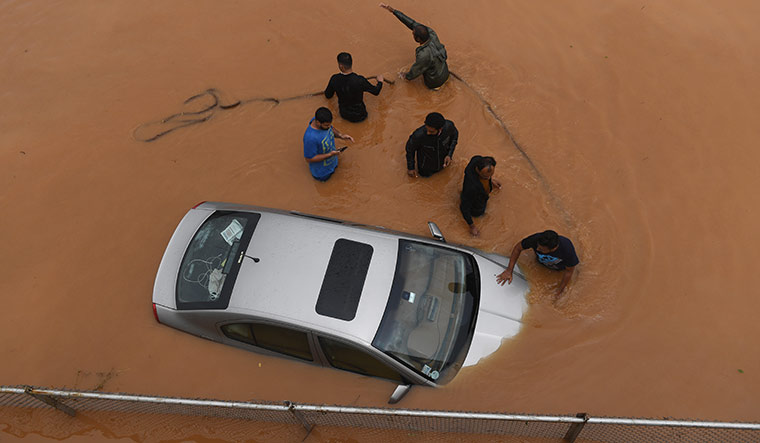 The floods in the IT corridor in Bengaluru last week has pushed the Bruhat Bengaluru Mahanagara Palike (BBMP) into action. For the second day on Tuesday, the BBMP carried out the demolition of residential buildings and compound walls at Munnenakolalu in Mahadevapura assembly constituency, that were found to be encroaching the stormwater drains.

At least 15 spots in the Mahadevapura zone have been identified by the civic officials as obstructing the flow of rainwater and nearly 700 structures have been marked for demolition in the city. The demolitions took off at layouts in Chinnapanhalli and Munnenkolalu lake in Mahadevapura zone.

Even as the BBMP started the drive, the residents of the layouts marked for demolition are crying foul saying the building plans were approved by the civic body and they were not aware of the sites and compounds being on encroached land.

The demolition is being targeted at only the common man, while the bigger fishes - the IT and tech parks - who too have encroached, have been spared, alleged Congress leaders, seeking equal action against violators.

Revenue minister R. Ashok warned that all illegal structures would be demolished. "These structures will be razed just like the Noida Twin Towers before the next monsoon. The demolitions will continue and there is no question of backing out. I have instructed deputy commissioner, assistant commissioner and tahsildars to assist the BBMP by providing the related documents. No one will be spared," said Ashok.

Ashok also alleged that the previous Congress government had approved building plans on 13-14 lakes before 2005.

"At least 30 IT companies have also encroached the rajakaluves. The CM has already directed the officials to continue the demolitions and not to spare anyone," he said.

The list of encroachers includes top builders, IT and tech parks and plush residential conclaves and gated villas like Bagmane Tech Park and Purva Paradise in Mahadevapura, RBD in three locations, Wipro in Doddakannelli, Eco-Space in Bellandur, Gopalan in multiple locations, and Diya school in Hoodi, Adarsha in R Narayanapura, Columbia Asia Hospital in Ramagondanahalli, Nalapad Academy in Challaghatta, Epsilon and Diyashree in ABK and Yamalur, Epsilon, Prestige group and Salarpuria.

The netizens called out the double standards of the government by targeting only citizens and demanded action against the officials and builders responsible for the encroachment and illegal construction over the rajakaluves.