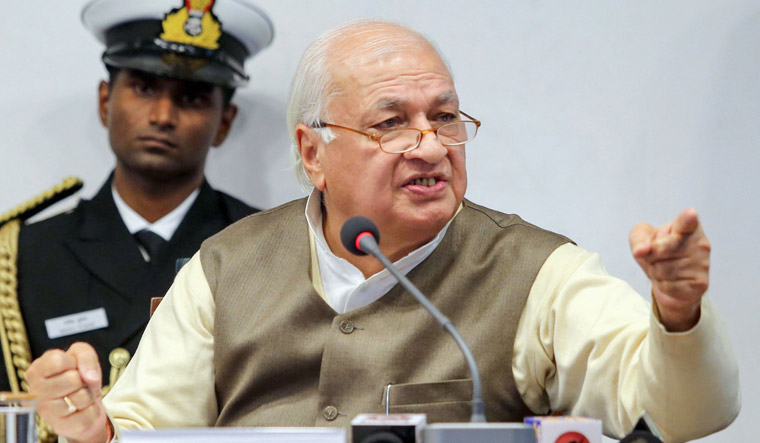 Kerala Governor Arif Mohammad Khan on Saturday said he will order a full fledged investigation into the allegations of nepotism in appointments made to various posts in the Universities in the state. His statement came as the tussle between the Governor and the ruling CPI(M) escalated further after he, using his authority as chancellor, stayed the Kannur University's move to appoint Priya Varghese, wife of former Rajya Sabha MP K K Ragesh, as Malayalam Associate Professor in Kannur University.

CPI(M) leader Ragesh is also the private secretary to Chief Minister Pinarayi Vijayan. "Right from the professor down to the lower staff, they want to have their relations... Now I am going to have a full-fledged inquiry on how many such appointments have been made during the last 2, 3 years", Khan told reporters in New Delhi.

He said he has received representations from various quarters regarding such appointments in the universities in the state. The Governor also came down heavily on Vice Chancellor of the Kannur University Gopinath Raveendran, alleging that he behaves like a cadre of the ruling party. Khan alleged that the VC pushed the case of CPI(M) leader's wife to the post of Malayalam Associate Professor by ignoring all the qualified candidates as he wanted to please those in power.

"Therefore, he is going out of his way. This is shameful," the Governor said.

Khan also criticised the LDF government's reported move to enact a law to curtail the powers and functions of the Chancellor of the state universities. "Why do they want to change the law? The law which they are proposing-- it makes their intention clear. They want to have Vice Chancellors who can appoint their family members in various positions of the Universities," the Governor alleged.

The CPI(M) has described as "unconstitutional" the Governor's decision to stay the controversial appointment of the Malayalam Associate Professor in Kannur University and rejected his "favouritism and nepotism" charge over Varghese's nomination to the post. Varghese had been proposed to be appointed as an associate professor in the Malayalam department by Kannur University, which triggered a huge political row as she had the lowest research score but the highest in the interview round and was declared first in the selection process.

Backing the Governor, Congress leader and Leader of Opposition in the state Assembly, V D Satheesan, has said Khan had actually used his power to prevent Kannur University's attempt to make an illegal appointment.

Meanwhile, amid growing differences between the government and Governor over the matters related to the administration of the universities, a meeting of the senate of the Kerala University on Saturday reportedly passed a resolution against Khan for not including its representatives in the search committee formed for selecting a new Vice Chancellor.

Earlier, the Governor had reportedly formed a search committee with nominees of the UGC and the Chancellor. A nominee of the Senate was not included in the search committee, drawing sharp criticism from the few members of the body.