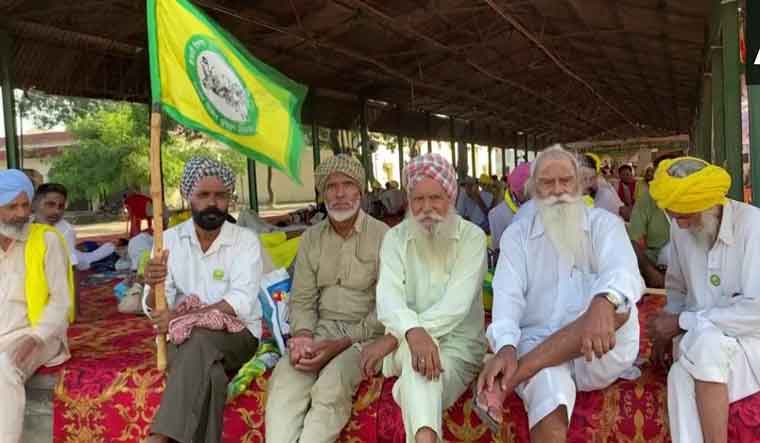 The Samyukta Kisan Morcha (SKM) on Thursday morning began its 75-hour-long dharna at Rajapur Mandi Samiti in Lakhimpur city to press for its various demands, including the sacking of Union minister Ajay Kumar Mishra.

The SKM had decided to hold a protest from August 18 to 20 to seek "justice" in the Lakhimpur Kheri violence case. "BKU national spokesperson Rakesh Tikait, national organisation secretary Bhudev Sharma and some other prominent leaders arrived here on Wednesday for the dharna," the district president of Bharatiya Kisan Union-Tikait (BKU-Tikait), the local convener of the agitation, Dilbagh Singh Sandhu, said.

Many more leaders of SKM would participate in the dharna, he said. Avtar Singh Mehlo, state vice president of BKU (Lakhewal), who arrived here at the dharna spot on Thursday morning along with his supporters, said "our fight is for justice to the farmers killed in Tikunia violence on October 3, 2021."

"We demand sacking of Union MoS home Ajay Kumar Mishra, compensation to the families of farmers who died in farmers' agitation, law for MSP, roll back of electricity bill 2022," Mehlo said.

The Union minister's son, Ashish Mishra, is an accused in the violence that left four farmers dead here last year. Farmers from various parts of UP, Uttarakhand, Punjab, and Haryana have started pouring in large groups to participate in the dharna.

On October 3 last year, eight people were killed in Lakhimpur Kheri in Tikunia village during a car incident that happened during a farmers' protest against Uttar Pradesh deputy chief minister Keshav Prasad Maurya's visit to the area. Four farmers who were part of the protest were mowed down by an SUV, with the minister's son allegedly as one of the occupants. A driver and two BJP workers were allegedly lynched by angry farmers.

A journalist had also died in the violence that triggered outrage among the Opposition parties and farmer groups agitating over the Centre's now-repealed agriculture laws.

"Though no written permission was sought or obtained, the authorities have made arrangements of safety and security, sanitation, and water etc," he added. Elaborate security arrangements in and around the Mandi Samiti have been ensured by the authorities.