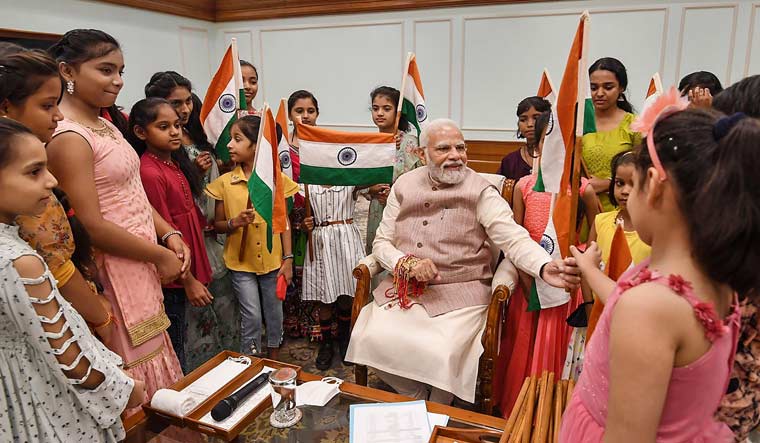 Prime Minister Narendra Modi celebrated Raksha Bandhan on Thursday with the daughters of his office staffers tying rakhis on his wrist. He gave them a national flag each for the 'Har Ghar Tiranga' programme.

"A very special Raksha Bandhan with these youngsters," the prime minister tweeted and posted pictures from the event.

Officials said the daughters of sweepers, peons, gardeners, drivers and other such members of the Prime Minister's Office staff tied rakhis on Modi's wrist.

They also shared a video of the celebration and the prime minister's interaction with them.

The prime minister was seen handing them national flags to hoist at their houses.

His government has urged people to hoist or display the national flag during August 13-15 as part of the 'Har Ghar Tiranga' campaign to mark the 75th anniversary of India's independence.

Modi said in a tweet, "Every Indian has a special bond with the Tiranga. Gave the Tiranga to my young friends earlier today. The smile on their faces says it all."

In another tweet, he said the kind of enthusiasm being seen among people for the 'Har Ghar Tiranga' campaign is a symbol of the unwavering spirit of the country's unity and integrity. This feeling is going to take India to a new height in the 'Amrit Kaal', he added.