Madhya Pradesh: 4 arrested after woman disrobed, beaten up in public in Jhabua 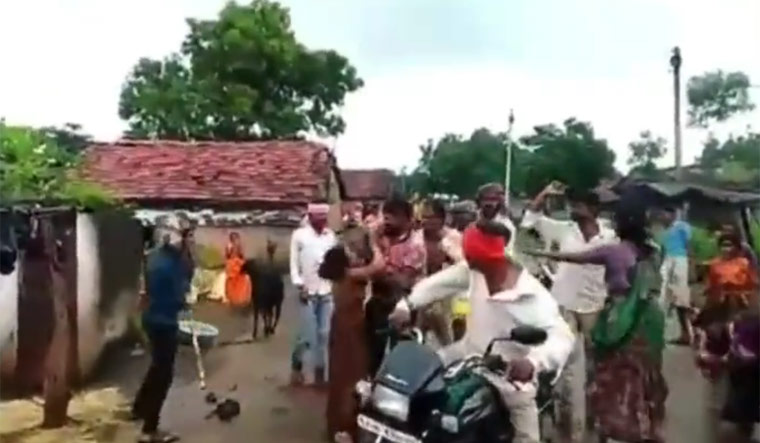 A tribal woman was partially disrobed and beaten up in public in Jhabua district of Madhya Pradesh on Thursday by a man, who is allegedly her paramour, and his associates.

A case was registered by police suo motu in the matter after a video of the incident went viral. The accused Mukesh Katara and three of his associates were arrested, Jhabua superintendent of police (SP) Arvind Tiwari said on Twitter.

Meanwhile, ex-chief minister and MP Congress chief Kamal Nath attacked the BJP government in the state, sharing three incidents of harassment/difficulties faced by women on the day of Raksha Bandhan, including the Jhabua incident. He demanded a probe into all three incidents and action on the culprits.

The video shows some persons beating up a woman with sticks and also disrobing her, even as some others attempt for a while to intervene. The incident occurred in Ruparel village under the Raipuria police station of Jhabua. The accused also belong to a tribal community.

According to sources, the woman had left her husband and went to live with Katara eight months ago, but she came back to her husband on Thursday. This enraged Katara who, along with few of his associates, beat up the woman and took her away forcibly on his bike. The police recovered the woman from Katara’s house. The woman, her husband, and Katara are also manual labourers, sources said.

Kamal Nath attacked the government on Twitter saying, “such behaviour with a woman on Raksha Bandhan day is shameful and against humanity. Don’t know why the elements engaging in such behaviour and taking law into their hands are totally fearless in Shivraj government. There should be a probe into the incident and strict action on the culprits.”

Nath also shared two other videos—one showing a pregnant woman in Betul being taken across a swollen rivulet in Betul on a charpoy and another of women selected as teachers (but awaiting appointment) being detained by police in Bhopal after they wanted to tie rakhi to chief minister Shivraj Singh Chouhan as mark of protest.

“It is shameful that the sister selected for teaching posts had come to tie Rakhis to CM Shivraj Singh Chouhan who loves to get himself called Mama; but instead of allowing them to ties Rakhis, the police of Mama detained these sisters. They are in jail on the occasion of Raksha Bandhan under the rule of Shivraj Singh alias Mama. The sisters should be immediately sent back home and given justice,” Nath said, sharing the video of the women in Bhopal.

Along with the video of a pregnant woman in Betul, Nath commented “this is the real picture of development in 18 years by the BJP government of Madhya Pradesh. Lives are being risked for taking a pregnant sister to hospital as her kin put her on a charpoy to cross a river. No roads, no culverts or bridges, no ambulances, no health services – development is seen only in speeches.”